Fans of Kourtney Kardashian woke up today furious with the Keeping Up With The Kardashians star over a photo she’d posted to her Instagram wearing a ‘Vote Kanye’ hat and seemingly endorsing Kanye West for president. West’s presidential run has been a controversial issue from the start, causing political friction among Donald Trump and Joe Biden voters alike, and causing personal tension in his marriage to Kim Kardashian West when an emotional campaign speech about abortion devolved into in inappropriate confession about their family. Further, many have indicated that West’s current behavior is a result of his mental health struggles with bipolar disorder, and Kim Kardashian addressed it head-on this summer, acknowledging her husband’s additional challenges with bipolar disorder and asking her fans to extend him grace. So: Given that Kim herself hasn’t endorsed a candidate, is Kourtney really sticking her neck out for West right now? We have another theory.

Here’s our detective work. Kourtney’s pic posing in a ‘Vote Kanye’ hat is the third Instagram story with a swipe-up function. The third story swipes up to West’s website where you can buy campaign merchandise, which fans were none too fond of either, but the first two swipe up to Poosh’s shopping guide for “the best vote merch for 2020.” Two things to note here: Kourtney’s lifestyle brand Poosh also includes West merch on their shopping guide, and Kourtney posts the same picture of herself in the Kanye hat twice, once linking to her own shopping guide and once linking to West’s side. 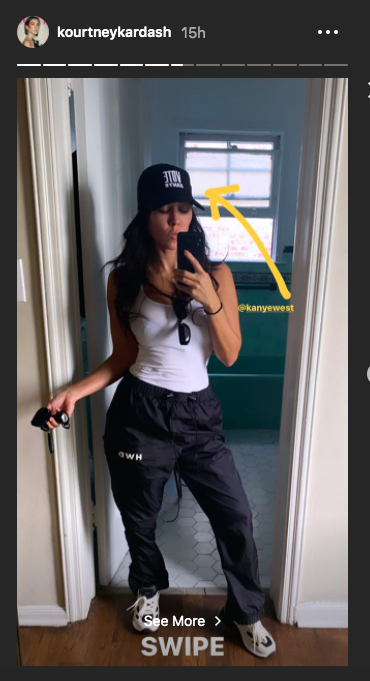 This is all a roundabout way of saying that this seems more like a business agreement to sell hats than an endorsement of a presidential candidate. Kourtney was hoping to sell items from her Poosh list, among which was Kanye West merchandise. And to be honest, it doesn’t seem like she much cares who people vote for — so maybe, the thought that she’d be casting undue influence didn’t particularly cross her mind.

It was still totally irresponsible of her to throw her weight behind a candidate this uncertain two weeks before an election, don’t get us wrong. But we wouldn’t be so quick to assume there’s a bigger political play here than making some money.