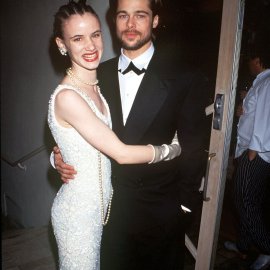 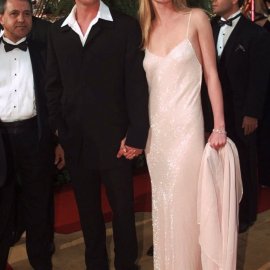 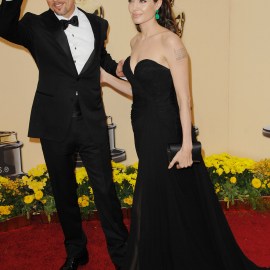 Last night was the long-anticipated table read of Fast Times at Ridgemont High starring the improbable cast of Morgan Freeman, Shia LaBeouf, John Legend, Julia Roberts, and, of course, everyone’s favorite set of exes: Brad Pitt and Jennifer Aniston. Now, we were happy for anything that was going to give us a glimpse of Aniston and Pitt interacting up close — while we know they’ve been friends for years, we the public haven’t seen them much together at all, and we were definitely curious to get a peek at their reportedly warm and friendly dynamic. But whether by pure coincidence or just to drive fans wild, Aniston and Pitt’s characters wound up talking their way through a sex scene, and watching the Ocean’s Eleven star blush and giggle his way through it feels like getting a decade of my life back. Okay, fine: the scene stops just short of them actually having sex — but believe me, the NSFW action is explicit.

Here’s the situation: Aniston is playing Linda Barrett, and Pitt is playing Brad Hamilton. Brad has a big ole crush on Linda, so it’s pretty much his dream come true when Linda says this to him: “Hi Brad. You know how cute I always thought you were. I think you’re so sexy. Will you come to me?”

Of course, this is Aniston saying the line to Pitt, who’s already starting to look a little pink around the ears — and that’s nothing compared to his reaction as Morgan Freeman details what happens next.

“She reached out and grabs him for a kiss, pulling him close,” Freeman narrates. “Then she pushes him away, so he can watch as she carefully unstraps the top of her bathing suit. The incredible Linda Barrett breasts fall loose (‘Lord have mercy,’ Freeman editorializes). Then, she takes Brad’s hands and places them on her as she begins unbuttoning his shirt they are just about to fall into passionate lovemaking when we hear—”

“Hey Brad, do you have any Q-tips?” Aniston says, revealing that it was a daydream all along. Freeman goes on to narrate how Brad was, ahem, pleasuring himself to the idea, and Pitt shakes his head in continued embarrassment.

Look, if you were able to watch this without getting butterflies in your stomach, you are stronger than I am. But between Pitt’s sudden glow-up into beachy handsomeness and Jen as winning as ever, there’s something about watching these two interact again that feels like a big warm hug.