These Famous Exes Will Always Be Friends 26 Images

Okay, we have to draw a line somewhere. If Leonardo DiCaprio and Brad Pitt are going to continue dating women aged 25 and under, we’re going to need them to become the Instagram-savvy boyfriends these ladies deserve — because right now, all the social media details we’re getting on these couples are frustratingly one-sided. German model Nicole Poturalski, who’s reportedly been dating Pitt since at least November, made a stir with her recent caption referencing some incoming hate under a pic possibly taken at Château Miraval, Brangelina’s wedding venue. (She was definitely at Miraval over their wedding anniversary, which many thought was a dig at Angelina Jolie from ex Pitt.) But those suggesting Poturalski’s caption took aim at Jolie were in for a surprise when the gorgeous model decided to respond to their comments — and her reaction may surprise you.

Poturalski’s photo series showed the young model and single mom posing in a cool orange button-up dress and dark shades: “Happy people don’t hate,” she wrote, which is about as breezy as an Instagram caption gets (Brad, Leo, take notes). But early commenters were decidedly less breezy, and one quickly asked her what this meant with regard to Pitt and Jolie, writing “If so, then why you & Brad hate Angelina? Practice what you preach, girl.”

Poturalski’s response? “Not hating anyone.” Simple and effective — though interestingly enough, she’s since deleted the exchange from her page. She also liked and responded with a prayer hands emoji to this comment about opining on other people’s relationships. 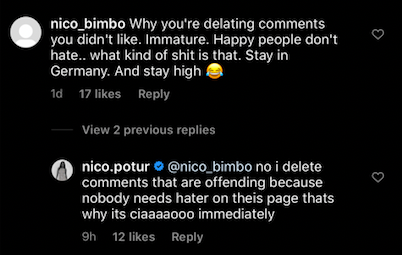 “Don’t get why ppl think that their opinion on some else’s relationship is RELEVANT & NEEDED,” the comment read. “Save yrself some unneeded worry — stay out of OTHER ppls relationships. Especially since it’s NONE of yr business/ not yr boyfriend/girlfriend!! Get a productive hobby & mind yr own business!” 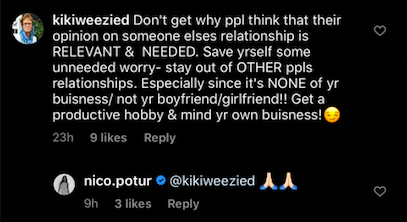 Clearly, Poturalski’s social media page has been shaken up by the public finding out that she’s dating Pitt, especially while his custody battle with Jolie is still ongoing. And still, all I can think about is how much better this would be if Pitt were on Instagram shadily liking comments and posting his own cryptic captions too. It’s a new world out there for twenty-something celebs — and that means it’s a new world for whoever they’re dating too.