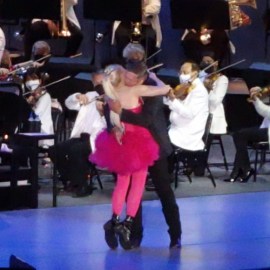 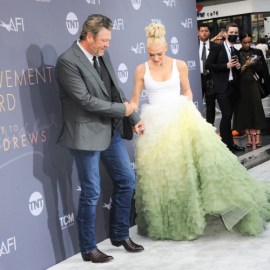 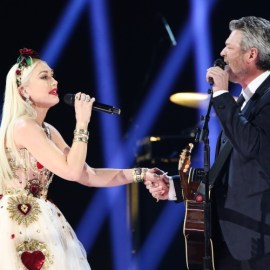 Gwen Stefani and Blake Shelton are one of those couples we never could have predicted, but now can’t picture apart — but apparently, certain anonymous sources don’t share our faith in the #gwake duo. A new report claimed that Stefani and Shelton’s relationship was growing tense in quarantine, which they’ve been spending primarily at the country star’s ranch in Oklahoma. While they’re now settled in Los Angeles at their new Encino home, the source says all that time in isolation was rough on the couple, even though the duet they performed at tonight’s Academy of Country Music Awards, “Happy Anywhere”, was literally written about how happy they are in quarantine. While the rumors briefly had us shaking, any doubts we had were swiftly extinguished by Stefani and Shelton’s super-romantic duet at the 2020 show.

While tonight’s ACM Awards performance showed the couple loved up and gazing into each other’s eyes as they belted out “Happy Anywhere,” a report from earlier this week suggested that their quarantine and upcoming move might have taken its toll.

“They feel suffocated and stressed. They’re both stretched to the limit,” a source told Us Weekly. “Friends say this move has turned into a nightmare. This is the toughest period they’ve had so far without a doubt.”

"Happy Anywhere" with @gwenstefani on the @ACMawards. Head to @CBS and @CBSAllAccess to make sure y’all don't miss any of the performances! #ACMawards – Team BS pic.twitter.com/r8ep6Patyi

Funnily enough, Shelton and Stefani’s own reports of their time in quarantine don’t exactly follow that narrative. Instead, Shelton’s seemed almost shocked at just how well he has been getting along with Stefani all this time, including weeks living with her three sons Kingston, Zuma, and Apollo.

From home haircuts to writing songs together, Shelton and Stefani were specifically inspired to release “Happy Anywhere” because this time had proven to them they could, in fact, be happy anywhere together.

“Even though Gwen and I just had a single out we decided that, under the circumstances, this year… man, there’s never been a better time for ‘Happy Anywhere,'” Shelton said in a Today statement following the song’s release. “We’ve all been in quarantine and lockdown, and hopefully we’ve been doing that with somebody that we really love and enjoy being around. That’s what happened with Gwen and me this summer — and this entire year.”

WOW! Single of the year! Damn y’all after all these years I’m still always so shocked and honored. Thank you to everyone who played a part in this song… THIS IS GOD’S COUNTRY!!! #ACMawards

While accepting another ACM Award tonight for single “God’s Country”, Shelton again thanked long-time girlfriend (and, let’s be real, almost-definite future wife) Stefani for all she brings to his life; “Thank you Gwen Stefani for continuing to encourage me to keep doing this and keep trying, and for being my inspiration.”

We don’t know if Stefani and Shelton have even heard the rumors from this unnamed source. But we’d like to consider this ACM appearance their official response either way, and the message is clear: there is nothing to worry about when it comes to this #countrygoals couple.