It’s 2020, which means that everything you love now comes with a new streak of wild and unrelenting chaos — apparently, The Bachelorette very much included. While Clare Crawley’s season had finally gotten together to start filming in La Quinta, California, having dutifully recast age-appropriate men for our now-39-year-old Bachelorette star, it seems the franchise has hit yet another unexpected snag in the form of Clare locking herself in her dressing room and refusing to come out (I paraphrase). New reports from Reality Steve, another Bachelor spoiler account, and on-set sources say that Clare and contestant Dale Moss are in love and leaving the show — and former Bachelor and Bachelor in Paradise contestant Tayshia Adams is now on set to take her place.

Here’s what we know. Over the weekend, Reality Steve retweeted a Reddit rumor making the rounds that Tayshia was on the Bachelorette set after Clare announced she was quitting the show. Reality Steve had initially been skeptical of reports that Clare was quitting, noting that ironclad contracts were in place to prevent exactly this from happening. He could, however, confirm that Dale had gotten Clare’s first impression rose, and further investigation into the Reddit rumor confirmed that Tayshia was on set.

(MAJOR SPOILER): I’ve been made aware of this Reddit post making the rounds. Been on the phone for the last 2 hrs digging. I cannot confirm with 100% certainty if it’s true yet, but if you ask my opinion, I think there is some serious validity to it based on what I’m hearing now pic.twitter.com/y0SudK7Pcl

(SPOILER): Although early social media activity was leading people to believe he never made it on the show or was eliminated night 1, that was never the case. Dale Moss received Clare’s first impression rose. pic.twitter.com/R5eqKRXhUZ

Life & Style first reported on Clare quitting with accounts from a source saying the Bachelorette star had “fallen in love” and “refused to come out of her room,” leaving producers “scrambling to figure out what to do.” With Clare and Dale in lockdown for so long, it’s not crazy to think the star might have tried to form a connection in the months before filming began — and it seems the former Bachelor contestant struck gold.

On the same IG Live, Steve also addressed the rumors that Clare and Dale had in fact started a relationship prior to filming, and defended himself on Twitter from those who said he was inciting backlash against Clare with his comments.

“IF Clare is sprung on Dale & she wants to leave, I can’t for the life of me believe it was bc the first time they met and spoke was on July 18th, the first day of filming,” Steve tweeted of their relationship after. “Hell, I HOPE that’s not the case. Some sort of pre-show relationship is only thing that makes sense to me.”

IF Clare is sprung on Dale & she wants to leave, I can’t for the life of me believe it was bc the first time they met and spoke was on July 18th, the first day of filming. Hell, I HOPE that’s not the case. Some sort of pre-show relationship is only thing that makes sense to me.

The producers’ next step? According to Reality Steve, they called up Clare’s old Bachelorette contestants — the ones they’d recast — and asked them to come back, potentially in preparation for the 29-year-old Tayshia taking over as Bachelorette.

While none of them have reportedly accepted, Reality Steve further reported fireworks at the La Quinta resort last night for filming — but whether they were for Tayshia or for Clare, we don’t yet know.

THIS I can confirm actually did happen. Why? I have no idea. But guys who were cut and never made to night 1 were reached back out to in the last week and asked back. None have accepted as far as I’ve heard https://t.co/QBbNgMH57E

The Bachelorette like you’ve never seen it? Welcome to 2020.

Click here to see the quickest breakups in Bachelor and Bachelorette history. 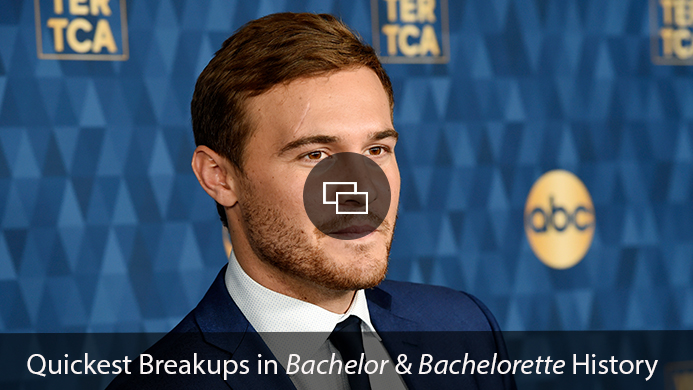