Happy 7th Birthday, Prince George! Doesn’t it seem like just yesterday that Kate Middleton and Prince William stood on the steps of the Lindo Wing, cradling their firstborn child? Fast forward to the present, and that tiny bundle just turned seven! And already, young Prince George has made quite a mark on the world with his charming personality, dapper style and mischievous grin. But for as much as you’ve probably heard about Prince George, there are some fun facts about the super-cute heir (he’s third in line to the throne) that you’d probably be surprised to learn.

Although Kate and William do an impressive job of maintaining their children’s privacy as much as possible for members of the monarchy, some of what we know about George comes from his public appearances — which are always memorable. A lot of what we know, though, comes from George’s proud parents themselves. Both Kate and William routinely share snippets of information about their eldest child and, well, who doesn’t love to learn more about this kid? It seems like he just gets more adorable with each passing year.

So, in celebration of the young royal growing another year older, here are some interesting things about Prince George you may not know.

Performing Is His Passion (And a Family Tradition!)

When Prince William met a young dancer by the name of Junior at an event for BBC Radio 1’s Teen Awards, he revealed that his firstborn inherited a love for movement, too. “George is doing dancing as well, he loves it,” William shared. “And my mother always used to dance, she loved dancing.”

Dancing isn’t George’s only creative outlet, though. In 2017, William shared that George had starred in the nativity play at his school (“He was a sheep”). And in 2019, while at the annual Royal Variety Performance at London’s Palladium Theatre, Kate told two young performers that George and little sister Charlotte “love performing” at home.

He’s Quite the Little Swimmer

Prince George and Princess Charlotte joined the #RoyalWedding as a Page Boy and a Bridesmaid.

During an investiture ceremony at Buckingham Palace in late 2019, William sounded like any other proud papa talking about how George could swim “quite well.” According to Eileen Fenton, a swimmer honored at the event, William said that the whole family enjoys swimming together. “I can remember seeing when the Queen was young and her sister Princess Margaret — we used to see them swimming in pictures,” Fenton recounted, adding of William’s revelation, “He said the whole family have done it.”

The Queen Is One of His Favorite People

🎉 Happy New Year! A new portrait of The Queen and The Prince of Wales, The Duke of Cambridge and Prince George has been released to mark the start of a new decade. Wishing all of our followers a happy and healthy 2020! Photo 📷 by Ranald Mackechnie.

You can practically tell when looking at photos of Queen Elizabeth II and Prince George that she has a soft spot for the seven-year-old. Back in 2016, Kate confirmed as much, explaining that George shares a close bond with the monarch. “He calls her ‘Gan-Gan,’” Kate said. “She always leaves a little gift or something in their [he and Charlotte’s] room when we go and stay, and that just shows her love for her family.” Aw!

He’s a Lot Like Any Other Boy His Age

Okay, so there is a lot that differentiates George from the quote-unquote average seven-year-old. Having said that, there are plenty of ways he’s a lot like any other boy his age. For example, in 2017 William visited McLaren Automotive headquarters, where he was shown a McLaren sports car crafted entirely out of Legos. His first thought? “Wow! My son’s very into Legos, and he’d love this,” William said of George’s affinity for the colored building blocks.

He’s Not Above a Bit of Sibling Rivalry

The Duke and Duchess of Cambridge are very pleased to share some new photographs of their family as they visited the RHS Back to Nature Garden at the #ChelseaFlowerShow on Sunday afternoon. The photographs were taken by @mattporteous. The #RHSChelsea Back to Nature Garden, designed by The Duchess and award-winning landscape architects Andrée Davies and Adam White of Davies White Landscape Architects, is a woodland setting for families and communities to come together and connect with nature. Her Royal Highness is a strong advocate for the proven benefits the outdoors has on physical and mental health, and the positive impact that nature and the environment can have on childhood development in particular. Over the past months, Prince George, Princess Charlotte and Prince Louis have helped The Duchess gather moss, leaves and twigs to help decorate @The_RHS Back to Nature Garden. Hazel sticks collected by the family were also used to make the garden’s den. The Duchess told Monty Don in an interview for the BBC: “I really feel that nature and being interactive outdoors has huge benefits on our physical and mental wellbeing, particularly for young children. I really hope that this woodland that we have created really inspires families, kids and communities to get outside, enjoy nature and the outdoors, and spend quality time together.”

If you need further proof that all families deal with sibling rivalry, look no further than young Prince George. During a gardening event, Kate confessed that George had turned their family’s pastime of growing sunflowers into a competition with his sister Charlotte and brother Louis. “The children are really enjoying growing their sunflowers,” Kate said before noting, “Louis’s is winning, so George is a little grumpy about that!”

It isn’t just Louis’ sunflowers that have made George jealous of his siblings recently, either. “George gets very upset because he just wants to do all of Charlotte’s projects,” Kate told ITV. “Spider sandwiches are far cooler than literacy work!”

He’s a Cool Kid at School

The Duke and Duchess are very pleased to share a photograph of The Duke and Prince George at Kensington Palace this morning. pic.twitter.com/MxcU0RqGvi

— The Duke and Duchess of Cambridge (@KensingtonRoyal) September 7, 2017

If you’ve ever wondered how George gets on with his non-royal classmates at Thomas’s Battersea school in London, well, rest assured he does all right. Speaking to Vanity Fair, a classmate’s parent said, “George is really happy at school, [and his nickname is P.G. He’s very popular and has lots of friends, and there’s very little fuss made about who he is.”

The Duke and Duchess of Cambridge are very pleased to share a photograph of Prince George and Princess Charlotte at Kensington Palace this morning. The photo was taken shortly before Their Royal Highnesses left for Thomas's Battersea. 📷 Kensington Palace

On the subject of George’s education, it would seem William and Kate are torn. In June, royal biographer Ingrid Seward pointed out that royal kids typically head off to boarding school around age eight — but they’re struggling with the decision due to the coronavirus pandemic. Even so, Seward thinks George would fit right in, saying, “William loved it at Ludgrove, as did his brother Harry. They both boarded full-time but Diana would visit at weekends. It’s a super-friendly school so it could be a good choice for George. He might follow his father to Eton College for his secondary education.”

George might be a royal, but that doesn’t mean he doesn’t enjoy watching TV and movies like the rest of us. In fact, it sounds like George might just be a budding cinephile! “Fireman Sam is taking an awful lot of interest,” William told BBC radio of his son’s viewing habits. “You have to pretend you’re really into [his shows] because George gets very upset if you’re not showing due diligence to the characters.”

William has also let it slip that George’s favorite movies are The Lion King and How to Train Your Dragon. Then, during a post-BAFTAs meet-and-greet, Kate reportedly told director Lee Unkrich, “Paddington is definitely up there, and so is Coco now. It’s great obviously because of William’s interest in film. It’s great to have that father-son thing.”

He Can Be a Handful, Like Another Mischievous Royal

🎂 Wishing a very Happy 70th Birthday to The Prince of Wales! #HappyBirthdayHRH Two new photographs of The Prince of Wales and his family, taken by @ChrisJacksonGetty in the garden of Clarence House, have been released to celebrate HRH’s 70th birthday — visit @ClarenceHouse for more 📷

George may look just like his dad, but his personality is shaping up to be more like another famous royal: Prince Harry! William told CNN that his eldest child is a “rascal” who reminds him a lot of his brother. And when asked in 2016 why they didn’t bring the lad along during a visit to India, Kate reportedly joked, “Because George is too naughty. He would be running all over the place!”

Four generations of the Royal Family 🎄 together at Christmas. New photos of The Queen, The Prince of Wales, The Duke of Cambridge and Prince George have been released as part of the launch of the @RoyalBritishLegion’s ‘Together at Christmas’ initiative. The initiative is designed to provide extra support to the Armed Forces and veteran communities at annual festive ‘get togethers’ across the charity’s network of outreach centres. The four generations of the Royal Family are pictured here preparing special Christmas puddings — with the four representing a cross-section of those supported by the Legion, from the children of service personnel, to Second World War veterans. The puddings will become the centrepieces of 2020’s get togethers, and form part of 99 puddings distributed across the charity’s network in the UK and the Commonwealth – also marking The Royal British Legion’s 99th year. Photos 📷 by @chrisjacksongetty

Kate has commented on her firstborn’s culinary prowess in the past, but fans got to see it in action last Christmas. To commemorate the holidays in 2019, Buckingham Palace released a series of photos of Queen Elizabeth II, Prince Charles, Prince William and — who else? — Prince George. The group was preparing four different puddings, all said to bring good luck.

He Missed a Birthday Tradition This Year

Sharing a 📸 taken by The Duchess ahead of Prince George’s seventh birthday tomorrow! 🎈

Unfortunately, the novel coronavirus pandemic means that 2020 is basically a do-over year. Things are weird and different and sometimes scary, not to mention so many things have been canceled. Among them is the ringing of the bells at London’s Westminster Abbey, an annual tradition — something that can’t happen until the pandemic dies down again. However, something tells us George will still manage to make the most of his special day!

Before you go, click here to see some of the best photos of the royal family. 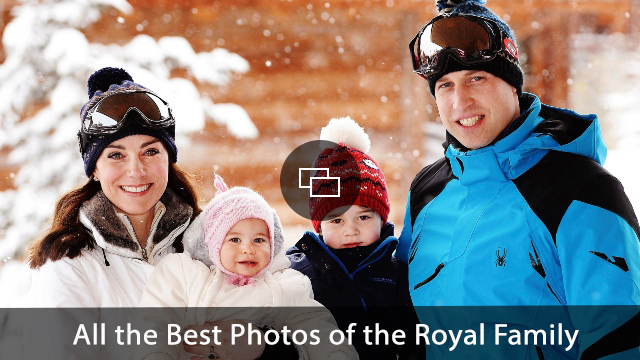