How do you celebrate a major milestone like your 40th birthday? For Jessica Simpson, who recently celebrated her sixth wedding anniversary with former football player Eric Johnson, the festivities include dusting off a seriously vintage pair of low-rise jeans from the aughts — and sparking plenty of intrusive comments about her body in the process.

The day before the singer’s big 4-0, she posted a mirror selfie from inside her boho bedroom. The singer was clad in a quarantine-ready tie-dye hoodie, and low-rise, distressed jeans that were all the rage at the turn of the century. (I’m having flashbacks just looking at them!) “

“I have kept these throwback True Religion jeans in my closet for 14 [years] (I’m not exaggerating!),” the mom of three wrote in her Instagram caption. “I figured that since I’m in the final hours of my 30s, I’d give them another try, and hello 40, so nice to meet you.”

Simpson seemed pretty pleased with herself for fitting into the jeans, but fans immediately sounded all the alarms under the guise of concern. One claimed the busy mom and author has been “shrinking so fast it’s scary,” and urged her to “be safe.” Another immediately made the image one about weight, which Simpson hasn’t addressed. “Okay, no more losing weight!,” they wrote. “You have lost it all and then some! You’re good.”

I have kept these throwback True Religion jeans in my closet for 14 yrs (I’m not exaggerating!). I figured that since I’m in the final hours of my 30’s I’d give them another try, and hello 40, so nice to meet you 🤸🏼‍♀️🙌🏼🥳

Other fans began speculating that Simpson might be trying to lose even more weight than the 100 pounds she initially lost after giving birth to daughter Birdie Mae. They blamed the media’s intense scrutiny of her body, including that infamous other pair of jeans which, when photographed at an upwards-facing angle, led to people body-shaming her. In February of this year, Simpson admitted that the fat-shaming “broke my heart.”

Simpson has yet to address any of the people in the comments, and she doesn’t need to — by all accounts, she’s putting her family and their happiness first, so why should she concern herself with outsiders’ opinions? In any case, one fan is already coming to her defense: “Didn’t any of your mothers ever teach you if you don’t have anything nice to say, don’t say it at all?,” the fan wrote. “All of you body shaming women should be ashamed of yourselves.”

As for the jeans themselves, you shouldn’t feel an obligation to fit into jeans you wore 5, 10, or 15 years ago if you don’t want to — and especially if your body has been through any sort of change, ranging from childbirth to simply living your life. Experts warn that keeping “goal weight clothes” in the back of your closet can have an adverse effect on your mental health, because it leads to even more dissatisfaction with your current body. Instead, focus on the small wins that come from making healthy choices, rather than arbitrary clothing sizes or numbers on a scale.

For her part, Simpson works hard, and teams up with celebrity trainer Harley Pasternak to achieve her goals, so she’s under the watchful eyes of caring pros. And if you see that someone else is making choices that result in their body changing shape, the best thing you can do is keep your opinion to yourself — and perhaps celebrate their birthday instead.

Click here to see all the celebrities who have sworn off dieting. 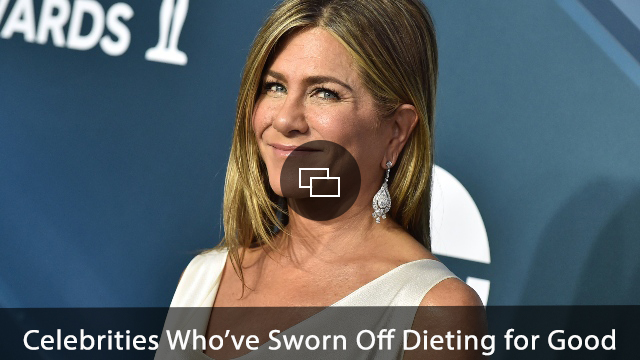