Look, we American girls love a good shopping spree. When you grow up in the era of rising Kardashian frenzy, it’s hard not to covet expensive clothes, shoes, and cars, and the luxury lifestyle they represent. But while designer logos and five-figure outfits are de rigeur in American celebrity culture, there’s a different mindset over in the UK — and when Meghan Markle came in hot with Beverly Hills price tags her first year as a royal, she reportedly ruffled quite a few feathers. While we were fully ready for this to be another example of Meghan being unfairly slandered (and we’ll take reports of the family’s reaction with a big grain of salt), we took a look at the actual numbers…and they are staggering. In her first year as a royal, Meghan Markle spent over five times what Kate Middleton did on clothing, and the details only get crazier.

New reports that Meghan’s spending was cause for concern among the royals comes from Royals At War: The Untold Story of Harry and Meghan’s Shocking Split with the House of Windsor. This new book details Meghan and Harry’s exit from the royal family, and suggests that the Sussexes’ spending was an early warning sign to some.

“The fact that Meghan splashed so much cash rang alarm bells with the traditionally conservative Queen Elizabeth,” authors Dylan Howard and Andy Tillett told Daily Mail. “Harry’s [spending] transformation is revealed as one of the fundamental factors behind the deep fissure that opened between him and his brother, Prince William.”

So, what kind of spending are we looking at? According to a UFO No More report, which annually catalogues royal family fashion, Meghan spent a whopping $509,278 on clothing in 2018, her first year as a royal. This number did not include her Givenchy wedding dress, as that was custom-made for her alone. In comparison, Kate Middleton spent $85,097 on clothing in 2018, less than a fifth of Meghan’s total.

Ladies are taking their seats!🎾

In an effort to be fair, UFO No More notes that Kate was on leave for several months in 2018. But in the previous year, when she had no such leave, her total only climbed to $129,560, still a far cry from what Meghan racked up.

Ultimately, it looks as though there’s something to the idea that Meghan’s spending habits didn’t quite line up with royal family tradition, or those English social circles on a larger scale. Kate, for example, was not brought up in the royal family, but seems to have inherited a different attitude toward clothing from Meghan, who came in straight from Hollywood.

Like so many of Meghan’s tradition-disturbing habits, her spending seems to have spread to Prince Harry as well, who spent a whopping $7,000 on acupuncture within a few months, then sprang for a $40,000 babymoon for himself and Meghan. As for Meghan’s maternity clothes? Those came in at $592,000 — though to give credit where credit’s due, Meghan remained superhumanly stylish throughout all nine months.

@meghanmarkle_official — Meghan and Harry are looking gorgeous attending the annual Endeavour Fund Awards at Mansion House London. 😍 It’s the Sussexes' first joint official engagement since announcing they would step down from the Royal Family.

Was it really Meghan’s spending that alerted the royal family to her devious ways, and kicked off the feud that led to their exit? Probably not. But it’s worth noting that we were on to something when we noticed Meghan’s impeccable fashion in her final week of royal engagements, read as a subtle defiance and final refusal to dull her own shine. Per Insider‘s count, Meghan debuted nearly $35,000 worth of fashion on her final royal tour — AKA what Kate Middleton would spend over the course of five months.

Meghan signaled loud and clear that she’ll be wearing whatever she likes. And yeah, she looked really good doing it. 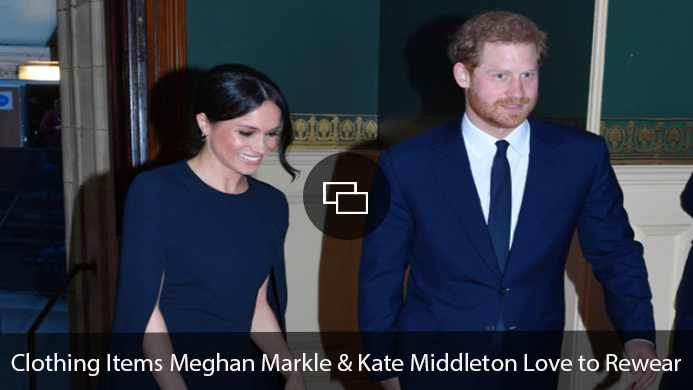