Looking back now, it’s weird to imagine a world in which Blake Shelton and Gwen Stefani’s love story didn’t exist. But this time five years ago, their respective marriages to Miranda Lambert and Gavin Rossdale were just ending — and their relationship was just beginning. Fans have since fallen in love right along with them. But it isn’t just Shelton and Stefani we’re all swooning over. It’s also his relationship with her three sons Kingston, 14, Zuma, 11, and Apollo, 6, that continues to warm our hearts.

Of course, it would make sense for there to be some growing pains along the way as the boys adjusted to a new father figure in their lives. Or, at the very least, growing pains from the boys’ dad, Bush rocker Rossdale. Has that been the case, though? What is Shelton’s relationship with the kids really like? What does Rossdale actually think of him spending so much time around his and Stefani’s sons?

Here’s a look at Shelton’s relationship with Kingston, Zuma and Apollo (not to mention their parents).

It's just everything!! Blake and Apollo. Gwen looking at Blake like….😭😭😭😭😭 https://t.co/HBQVMAdE7P

In January 2016, mere months into their debut as a couple, Shelton and Stefani squeezed in some quality time with the kiddos in her hometown of LA. First, they hit up the famed ArcLight theater for a showing of Star Wars: The Force Awakens, followed by a quick bit at the Cheesecake Factory (stars, they’re just like us!). Everyone reportedly had a blast, suggesting Shelton got a solid early start on bonding with the boys.

October 12, 2016 – Gwen, Blake and the boys made a trip to Disneyland. It was Blake's first visit to Disney! pic.twitter.com/oqs9gVFofa

By the fall, the family had bonded enough with Shelton to bring him into one of their favorite traditions: going to Disneyland! In October 2016, Stefani, Shelton, and her kids were photographed looking happy and having fun at the iconic theme park. And since Apollo was only two at the time, Shelton played the doting bonus dad — carrying the toddler around in his arms throughout the day.

By November 2017, Shelton had been dating Stefani for two years — and he admitted he felt as though he was finally hitting his stride with the boys. “For a long time, it was awkward trying to figure out what my place is and in their mind too,” Shelton told People at the time. “The best part for me, selfishly is discovering a part of myself that I never really knew was in there… it’s definitely an instinct that kind of kicks in.”

It may have taken Shelton a minute to get his dad bearings, but even back then it was clear he was all in when it came to Stefani’s sons. “They’re so damn funny,” he said of the boys. “It’s just my first time being around it, and it’s easy to fall in love with those kids. They’re pretty special.”

Roughly a year later, Shelton’s relationship with Stefani’s sons had grown even more. While he didn’t think being a dad was in the cards for him, he admitted he was relishing every minute of being in the boys’ lives. “I never saw that coming,” he told Today. “At this point in my life, I kind of had put [having kids] as like, ‘Well, I guess that wasn’t meant to be.’ Then all of a sudden it happens one way or another and it’s like, ‘Wow, [I] missed out on a lot.’ And so having them around — I don’t even know how to describe it. It’s so much fun.”

By June of 2019, it was clear to, well, everyone that Shelton and Stefani were in it for the long haul. But the more their relationship grew, the more Stefani and Shelton had to learn to balance co-parenting as a unit with Rossdale. And, spoiler alert, it wasn’t always easy. “Gwen and Gavin have had a challenging time co-parenting,” a source told HollywoodLife, pointing out that the two “don’t see eye-to-eye on several things.” Still, by the time Father’s Day rolled around, they (plus Shelton) proved they could be on the page.

“Gavin will have the kids on Father’s Day and both Gwen and Blake know that’s best for the kids as it’s his day. Gwen knows how much the boys love Gavin,” the source explained, adding, “Blake is simply Gwen’s boyfriend to them, but he’s so helpful with the kids and truly cares for them and is always there as an ear to listen and support Gwen as she deals with Gavin and issues that arise from co-parenting.”

Another Year, Another Celebration

That same summer, Kingston, Zuma and Apollo proved Shelton was more to them than just their mom’s boyfriend by celebrating him on his 43rd birthday. The cute little blended family hung out at the Shedd Aquarium, and then the boys surprised Shelton with super-sweet personalized balloons. Apollo’s balloon even revealed his oh-so-precious nickname for Shelton: “Big Buddy.” We melt!

Who would have ever thought that hard-partying Shelton would abandon drinking and hunting (okay, probably not entirely, but still) for family-friendly fun? “Blake has made Gwen’s boys a huge priority in his life,” a source told Entertainment Tonight in August 2019. “Gwen and Blake do so many fun activities with the boys, and Blake plays with them like a big kid. He seriously enjoys doing things with the kids like going to the movies, fishing, camping and teaching them to horseback ride and boating.” Basically, emphasized the source, Shelton “cares for them like [they’re] his own.”

Right around the time marriage rumors about Stefani and Shelton really started heating up, she gave him a compliment that created even more buzz. During an appearance on the Today show, Stefani vouched for Shelton’s parenting skills in a big way, referring to him as a “good dad” and parenting partner. “He’s been helping me out a lot, so I literally get to the point where I’m like, ‘You gotta get home, I need help.’ It’s hard. I got three boys,” Stefani admitted. Ol’ Blake, stepping up!

It’s no surprise that Stefani enjoys having Shelton around her sons — she loves him. The bigger test was whether or not the boys’ dad, Rossdale, felt comfortable with it. And according to Us Weekly, the rocker essentially signed off of having Shelton as a co-parent. “Gavin supports their having a strong male influence like Blake when he’s not around,” an insider told the mag in November 2019.

And why not? Another source underscored just how much fun the boys have with Shelton, saying, “Blake loves getting dirty with the boys…they’re always playing basketball or running around. They love it there [at Shelton’s Oklahoma ranch] because it’s just the five of them out on the land, hunting or hiking.”

You know things are serious when a Christmas tradition comes into play! In December 2019, Shelton shared with E! News that he and Stefani do the same thing with the boys every holiday season. “You know, it’s chaos. Let’s just face it. At our house, it’s literally chaos,” he playfully shared. “There’s not one thing outside of just — they have that moment when they run through the wrapping paper wall that she sets up every year. That’s about the only thing that I think consistently happens.”

In March 2020, Stefani took the stage with Shelton in Los Angeles for a surprise rendition of their hit duet “Nobody But You” — and in a sweet show of support, Kingston and Zuma were there cheering the two on. Afterward, Stefani posted a heartwarming selfie of all four, which were taken at The Forum in Los Angeles.

When the coronavirus pandemic forced the country into a lockdown, numerous reports put the boys at Shelton’s Oklahoma ranch with him and Stefani. Rossdale seemed to confirm as much in April when he guested on SiriusXM’s Trunk Nation radio show, telling host Eddie Trunk, “Yeah, I took the first two weeks with them, and then they went to Oklahoma. And, you know, they’re on a 10,000-acre ranch, so we’re thinking it’s okay for now, but we’ll see.”

However, Rossdale hinted the separation may have caused a little undue tension in the family’s otherwise peaceful co-parenting arrangement. “That is a real big dilemma for parents with kids with split custody,” he said, adding, “I know who’s around me — no one is. And I know who’s bringing me the coronavirus — no one is. But you send your kids out to someone else, and they come back to you and now you’re prone to whoever they’re with. So, it’s a tricky one for all divorced parents.”

In what could go down in history as one of the cutest celebrity moments ever, Stefani shared a video of Shelton planting a big smooch on Kingston’s cheek to celebrate him turning 14.

Before you go, revisit some of the cutest Shelton and Stefani moments caught on camera. 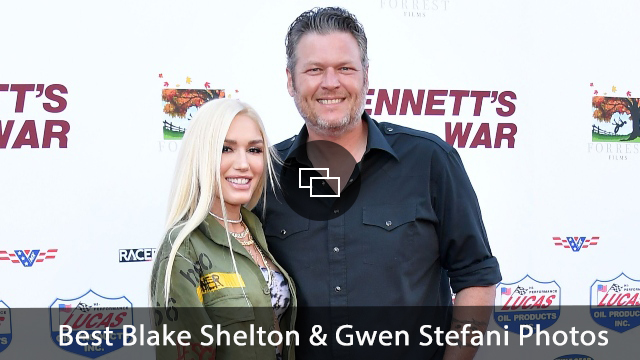