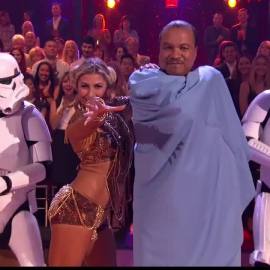 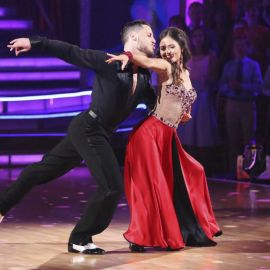 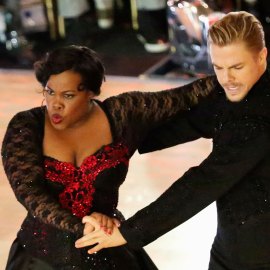 It’s been a long time coming, but Kaitlyn Bristowe’s dream of competing on Dancing With the Stars is finally coming true. Five years after her season of The Bachelorette, she’s been tapped to compete on the upcoming Season 29 of DWTS. Granted, she mistakenly thought for a moment boyfriend Jason Tartick was proposing when she got the big news. But we get the impression Bristowe is perfectly happy to be saying “I do” to a shot at the Mirrorball Trophy instead.

Of course, there could be no one better to break the news to Bristowe than Bachelor franchise host Chris Harrison. It all went down on Monday night’s episode of The Bachelor: The Greatest Seasons — Ever!, which fittingly dove into the best moments from Bristowe’s Season 11. As Bristowe reflected on her time on the reality dating show, the host asked Tartick to join them. “By the way, I know you mentioned meeting your future wife… you know I’m an ordained minister,” Harrison said to Tartick, leading to a bit of proposal confusion (Bristowe even thought AirPods in Tartick’s pocket might be a ring box).

As it turned out though, Harrison was the one popping a question. “In all seriousness, I do have a real question for you, Kaitlyn. This is a question I’m so excited to ask you because, well, your life is about to change,” he said, cueing the most dramatic pause ever. “Kaitlyn, will you be on the next season of Dancing With the Stars?”

In news that likely comes as little surprise to Bristowe’s fans, she quickly said yes. “Are you serious? Chris! I’m shaking. Oh my gosh. Chris, I’m going to cry,” she gushed. “Yes, yes! I’m so honored to say yes.”

Speaking to Entertainment Tonight correspondent Lauren Zima (aka Harrison’s girlfriend) after accepting the gig, Bristowe admitted joining DWTS is a full-circle moment for her. In the last few years, she’s openly discussed her issues with Bachelor creator Mike Fleiss, who she felt blocked her from being asked to participate.

“I just think it goes to show that if you’re resilient and you’re always strong in what you believe in and fight for what you want, as long as you’re a good person doing those things — even if it takes five years, you know something good will come from it,” she said, adding, “I had kind of let it go at this point even though it was still a dream of mine. So, for it to come full circle five years later after standing strong in what I believe, it feels… yeah, like a wrong made right.”

Regardless of how it came to be, Bristowe is ecstatic to get a chance to do what she loves. “Dancing is what brings me the most joy in life, and it’s something I’ve done since I was little. I remember saying that to Mike Fleiss: ‘ I don’t care if it’s on TV, I don’t care if I get paid.’ To be in a dance studio with professional dancers eight to 10 hours a day doing what I love to do at this point in my life would just make me so happy,” she told Zima.

Proof Bristowe is going all in for the experience? She’s hired a trainer and — wait for it, fans — cut her wine consumption way back. Oh, it’s on.

Before you go, check out all of the injuries on DWTS over the years.