While the Kardashian family is famous for knowing everything about each other’s lives, some of the West children might need to do some extra studying to keep up. Yesterday, on her Instagram Stories, according to People, Kim Kardashian shared an adorable, funny photo of a fun fact card that Saint gave her as a Mother’s Day Gift. According to the mother of four, her third child does not seem to know much about his parent – starting with her age.

The 4-year-old, and third child of the KKW Beauty founder and Kanye West, believes that his mom is only 11 years old. While this statement needs to be revised, some of these “facts” are more subjective. Understandably, Kardashian likely is disheartened when Saint says that he believes that “she likes to leave me alone,” with the Keeping Up With The Kardashians star commenting “WTF” regarding this statement. Yet, he goes on to contradict this statement with his other answers, inclining us to accept that his mom rightly says that this is inaccurate.

Another fun fact we learned from this letter: The middle Kardashian hates asparagus, despite her son thinking that the green vegetable is her favorite food.

Like many kids, he seems to love buying new smartphone games. When explaining their favorite bonding activities, the Skims founder’s son answered: “We like to buy apps on the iPod together.” In her Stories, Kardashian clarified this statement and said: “I don’t but he does LOL.”

However, with the last fill-in-the-blank, it seems that the mom and son found something on which they can – at least partially – agree. When finishing the sentence: “As you can see my mom is special because…,” Saint answered, “she snuggles me and she buys things for me.” In her correction, Kardashian took out the latter half and replied: “Best thing ever!!!! He got this right for sure!!!!”

Happy Birthday to my King

Her son might have a lot to learn about this famous parent. However, it seems that Kim is the one doing the heavy lifting on the parenting front during the quarantine. Despite this busy role, she has made time to dedicate to her marriage, too, recently posting celebratory photos for both Kanye West’s birthday and the couple’s 6th wedding anniversary.

With their oldest daughter, North’s 7th birthday tomorrow, we cannot wait to see what the family has in-store to honor the occasion. 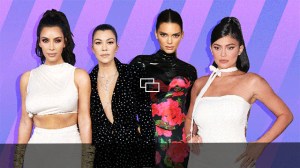 Before you go, check out some more huge celebrity families.