While Anderson Cooper’s son Wyatt Morgan Cooper, unfortunately, never had the chance to meet his grandmother, he’s sure to always have her by his side in his nursery, with a drawing she drew hanging on the wall.

This week, Cooper gave an inside look into the almost 8-week old’s nursery in a video for People. See the entire clip below.

In the footage, the CNN anchorman welcomes us into his son’s sanctuary and explains: “We wanted everything in the nursery to really be personal and to have a personal history.” He introduces us to his favorite stuffed animals from childhood and admits: “I’ve been saving them for when I had a child — if I had a child.” During the show-and-tell, his Snoopy toy makes an appearance and he says he used to grab him by his neck, apologizing in advance to his son about the area’s lack of stuffing. We then learn that the television personality custom-tailored his brother’s T-shirt for the stuffed dog because his child self was worried that he might be cold.

The next guest gives us some insight into how the Anderson Cooper 360° host started to develop his presentation skills. He exclaimed that his toy elephant Cuddles ” . . . was kind of my best friend when I was little.” And he continued, “I used to talk to him all of the time.” We last hear about his ex-partner Benjamin’s Kermit doll, who traveled from France to surprise the Wyatt.

“So the gang’s all here. And it makes me very happy,” Cooper enthusiastically concludes, before moving onto a more sentimental piece: a drawing by his late-mother, artist, fashion designer, and socialite Gloria Vanderbilt, who died in June 2019. He explains the piece in detail: “It was one of the last drawings that she actually did before she died. And I really liked it, and she gave it to me.”

The correspondent describes the scene depicted: “It’s a man on a boat with a flower in his hand heading toward a woman who’s waiting for him on the shore, and she has the same type of rose in her hand.” On the left bottom corner, the drawing reads “nothing can ever separate our love,” a heartwarming message that Vanderbilt’s son and grandson can treasure forever. 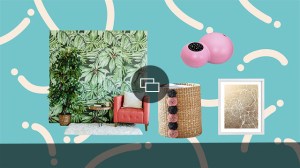 For more artistic nursery inspiration, before you go, check out these unique nursery decor pieces that you will want to steal for your own bedroom, too.