If you’re anything like us, you’ve already re-binge-watched all 16 seasons of Grey’s Anatomy during lockdown, and now you’re in a show-hole. Well, fellow Grey’s fans, our luck is looking up — Netflix’s new docuseries Lenox Hill just dropped, and it’s already being hailed as a real-life version of everyone’s favorite fictional medical drama. Bonus? It gives us all an opportunity to recognize medical workers for their heroics.

So, here’s the gist. Unlike Grey’s, this docuseries does not take place in the hallowed halls of Grey Sloan Memorial Hospital. Rather, as the title would imply, it follows four doctors (and all of the other medical professionals who cross their paths) at Lenox Hill Hospital in New York City’s Upper East Side area. The cast of “characters”? Brain surgeons John Boockvar and David Langer, along with ER doc Mirtha Macri and OBGYN resident Amanda Little-Richardson.

Suffice it to say that viewers are privy to the medical cases that come through Lenox Hill. However, the series also suggests that while shows like Grey’s obviously take liberties with reality, there is some truth to the inherent melodrama surrounding medical workers in high-pressure hospitals. Given the life-or-death stakes involved in what they do and the commitment that requires, it’s inevitable their work and personal worlds bleed (no pun intended) together.

And while Patrick Dempsey isn’t one of those doctors, he does have a sort of counterpart at Lenox Hill in Dr. Boockvar.

“I’m extra excited b/c the real-life McDreamy is neurosurgeon @johnboockvar who’s been one of my close pals for over 30 years,” former Survivor contestant Chrissy Hofbeck tweeted on Monday. “Here are some pics of us when we were 18 years old lol. Who woulda known these pics would become a reality TV crossover?!” Despite the fact that the throwback photos definitely give off some serious MerDer vibes, Hofbeck clarified that the two are and have always been “just great friends.”

I'm extra excited b/c the real-life McDreamy is neurosurgeon @johnboockvar who's been one of my close pals for over 30 yrs. Here are some pics of us when we were 18 yrs old lol 😍😍 Who woulda known these pics would become a reality TV crossover?! #LenoxHill 2/3 pic.twitter.com/yoKcX63gxd

However, viewers will get a behind-the-scenes peek at how Boockvar (and the rest of his colleagues) balance their actual romantic partners and intense shifts at the hospital. And since the series is only eight episodes long, you can get your Grey’s fix relatively quickly.

Before you go, revisit the most shocking moments from every Grey’s finale. 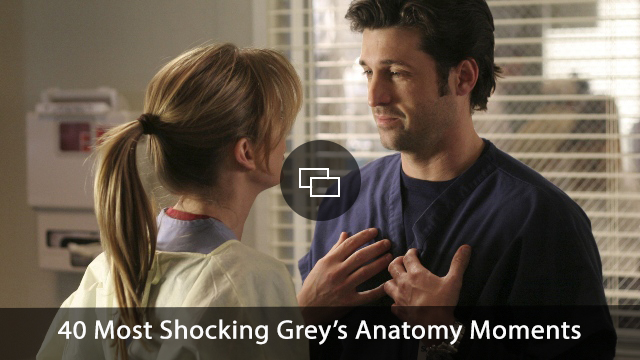