If you didn’t see the resemblance between Kylie Jenner and her 2-year-old daughter Stormi Webster before, you will now. On Thursday, the makeup mogul reposted a side-by-side comparison of her little girl right now and her when she was presumably around Stormi’s age. The result? Well, it’s safe to say Kylie is raising her own mini-me in more ways than one.

Granted, you can definitely see hints of Stormi’s dad, Travis Scott, in the little girl’s face. In fact, we sort of assumed she looks like he did when he was a little. But when a fan took a photo Jenner posted of Stormi on Wednesday and placed it right next to a photo of young Jenner, it made it easy to see Stormi favors Mama, too. Those big beautiful eyes, that little smile, her cute nose — all just like baby Jenner’s. She gets it from her mama, y’all.

While Stormi being Jenner’s doppelganger comes as a surprise to us, it’s not news to Jenner. She often refers to Stormi on social media as her “twin” and, earlier in May, she reposted an even younger side-by-side comparison of her with her daughter to point out their similarities. Okay, Jenner, you win. We totally see it now!

Regardless of who you think Stormi looks like, there’s no denying that Jenner and Scott’s daughter is adorable. Earlier this month, Jenner shared a video of Stormi doing the viral #ChocolateChallenge, where she’s told she can have candy but not until her mom gets back. In the footage of Stormi, she sweetly chants to herself while she waits for Jenner to return: “Patience, patience, patience, patience.” Be still, our hearts.

In fact, Jenner’s little mini-me has kind of been stealing the social media spotlight lately. Just last week, the 2-year-old and her cousin Chicago West (daughter of Kim Kardashian and Kanye West) riding in a red wagon together and indulging in some “girl talk” made fans melt.

Before you go, check out 10 of the first things Jenner did as a new mom. 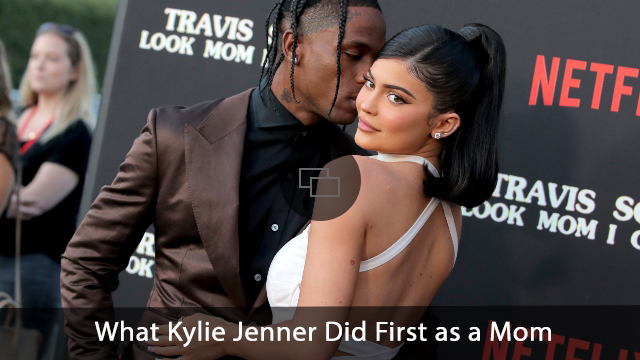 35 mins ago
by Ellen Niz