When someone gives birth, some of the first questions people might immediately ask are, what is your baby’s name? Is it a boy or a girl? Who do they look like?  And there’s a widely believed assumption babies will look either like their mom, dad, sperm donor, or biological parents. But Shay Mitchell’s recent photo that she shared on Instagram of her daughter Atlas just goes to show that babies aren’t always carbon copies of the people they’re most closely made up of.

Related story These Daughters Look Just Like Their Famous Moms

Seven-month-old Atlas’ mom Mitchell is of Scottish and Filipina descent while her dad Matte Babel is afro-Canadian— and if you look a little deeper you’ll find that their fare-skinned, piercing blue-eyed girl looks so much like the Pretty Little Liars actor’s dad, Mark Mitchell. But since papa Mitchell isn’t so public, he wasn’t the first person to come to mind when we were trying to make a look-alike connection. Instead, we couldn’t help but think about how much Atlas looks like Pretty Little Liars’ Toby Cavanaugh. Our revelation is a bit fiction fandom, but hear us out!

Happy #FathersDay and cheers to all the amazing dads out there! Especially this one ❤❤ pic.twitter.com/gOkYt6bUOd

If Shay Mitchell’s character Emily Fields had a daughter with Spencer Hasting’s husband Cavanaugh, she would look like Atlas (without the adorable cleft chin, of course). This conspiracy theory has some obvious plot holes, but entertaining ourselves with this plot twist ending to PLL is something that can bring this beloved show in the spotlight again. And who wouldn’t want an extended ending of PLL with Atlas making a guest appearance? Now that would be quite a little lie.

Before you go, click here to see all the celebrity kids who look like their famous fathers. 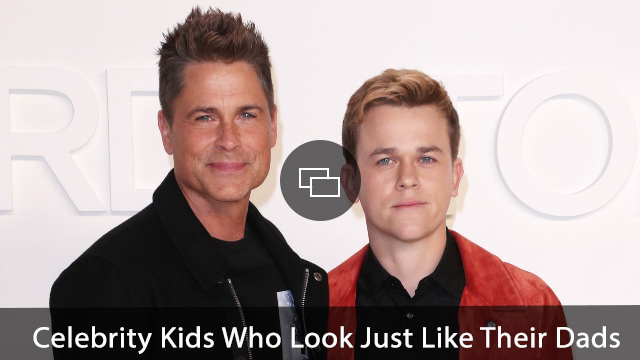