It’s not surprising that a son would look like his father. What is surprising is when a son looks so much like his father you can hardly tell them apart! Kelly Ripa’s latest photo of son Michael Consuelos proves he is dad Mark Consuelos double — to the point that we thought it was the parents-of-three, not a mother-son snapshot.

Related story This Is What Mindy Kaling Really Thinks About Those Rumors B.J. Novak Is the Father of Her Kids

The fact that Michael bears a resemblance to his famous father isn’t breaking news, of course. In fact, he plays the younger version of his father’s character, Hyrum Lodge, on the hit CW series Riverdale. But as he gets older, the resemblance just keeps getting stronger. Maybe it also has something to do with the fact that Michael seems more grown-up than ever before since he’s embarking on a brand new journey. “This kid! #NYU #2020,” Ripa captioned her Instagram story pic with her 22-year-old son.

Like most members of the class of 2020, Michael graduated virtually due to the coronavirus pandemic. That doesn’t dim his parents’ pride in him, though. During a recent episode of Live With Kelly and Ryan, Ripa gushed that her eldest child is “such a good person and a hard worker.” She wished she could have “some big event celebrating him” for graduating. “And he, in typical Michael fashion, said, ‘It’s not a big deal. As long as I still get my degree, it’s fine.’”

For reference, here’s a photo of Mark when he was younger.

And one of Michael and Mark together.

Happy bday to my eldest. Love you Michael. My mini me is now major me

Seriously, twins. As for Michael’s continued evolution, it seems as though Mark’s lookalike son has come a long way. Back in October, Ripa made an appearance on Jimmy Kimmel Live! (back in the good ol’ pre-quarantine days) and discussed how Michael was adjusting to adult life.

“He lives in Brooklyn, in Bushwick. He loves the freedom. He hates paying his own rent and is chronically poor,” Ripa comically revealed, joking that he was a little overeager last year to receive his annual Halloween card from his grandparents — because it had 20 bucks in it. “He’s called three times, like, ‘Has the Halloween envelope arrived?’ because he needs to take the subway to get [it] just so he can have electricity. He’s experiencing being an adult.”

Before you go, check out other times Ripa and her family were the cutest ever. 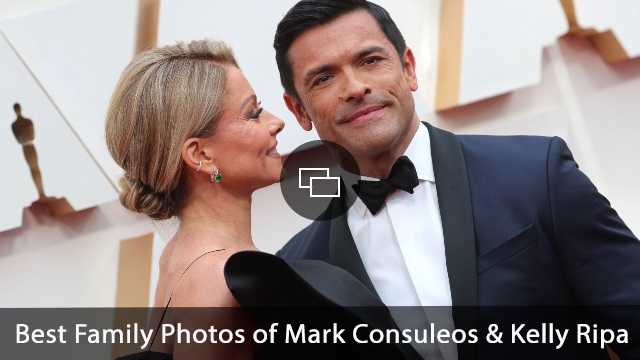