Barack Obama is that dad, y’all. Yes, he’s aware of the gravitas of the coronavirus pandemic. But as a phone call with some of his former administration staffers reveals, the former POTUS is also not-so-secretly reveling in the fact that now daughters Malia, 21, and Sasha, 18, have to hang out with their dear old dad since they’re currently quarantined together at the family’s D.C. home.

Speaking with his former staffers (in audio obtained by Yahoo News), Barack made a few confessions. First, having no sports to watch due to the pandemic and subsequent social distancing has been “driving [him] nuts.” But ⁠— second confession ⁠— the upside of the quarantine has been the fact that Malia and Sasha “are stuck having dinner with me.” Ah, we can just picture the girls now, sitting around the dinner table listening to Barack’s trademark dad jokes!

Barack isn’t the only one happy to have the Obama girls home right now, either. Speaking with Ellen DeGeneres in a call shared by the talk show host on social media, Michelle said the family is making the most of their time both separate and together. “Everybody’s home,” she told DeGeneres. “The girls are back because colleges are now online. So they’re off in their respective rooms doing their online classes and I think Barack is⁠ — I don’t know where he is. He was on the phone on a conference call. I just got finished with a conference call.”

Even though the family of four has been at home for the past several weeks, it’s still managed to be a big couple of months for the Obamas. Earlier this month, Michelle’s Becoming documentary dropped on Netflix, in which both Malia and Sasha made much-celebrated surprise appearances.

“This has demonstrated in a way — it’s just like, damn, those eight years weren’t for nothing. You know?” Malia tells Michelle in one emotional behind-the-scenes moment from the documentary. “You see that huge crowd out there and that last kind of speech you gave about — people are here because people really believe in hope and hope in other people.”

As for Barack, it was recently announced that he will be delivering a virtual commencement speech to high school seniors everywhere on Saturday, May 16. And of course, at some point, he’ll have to come to terms with the fact that Malia and Sasha will eventually return to Harvard and the University of Michigan, respectively.

For now, though, here’s hoping our former POTUS squeezes in as many dad jokes as he possibly can into the family’s remaining time at home together.

Before you go, check out 11 other times Barack has lived his best life post-White House. 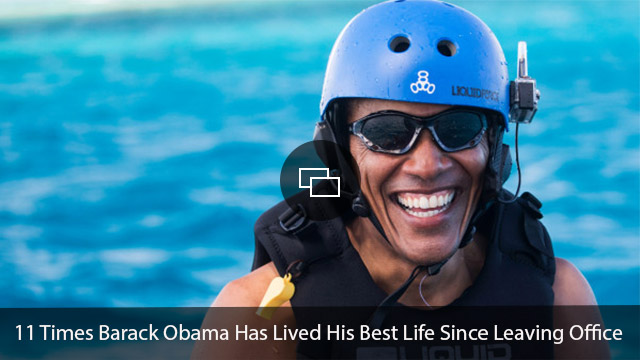