May has come and gone with no new season of The Bachelorette, a loss felt all across Bachelor Nation. But where there’s Chris Harrison, there’s a way, and we finally have details about Clare Crawley’s season of The Bachelorette — um, and Tayshia Adams’ too. In the weeks leading up to The Bachelorette‘s premiere date, we’ve learned (SPOILERS AHEAD) that Clare got engaged to her first impression rose recipient Dale Moss, Colton Underwood’s runner-up Tayshia Adams was called on to take her place, and we have no idea what part of either of their journeys they’re going to show. Could it be — for real this time — the most dramatic season ever?!

Here’s what we know.

When Does the Season Premiere?

Get ready Bachelor Nation! @clarecrawley's season of #TheBachelorette premieres Tuesday, October 13th at 8|7c on ABC. It's about time. 🌹

ABC has officially confirmed a premiere date for The Bachelorette: Tuesday, October 13. It will be airing on Tuesdays at 8 p.m. ET, not Mondays, for the entire season.

Who Is Clare Crawley?

We all have our ups and downs and things in our lives that can weigh heavy on us. No one is exempt from this. But I hope you all have something in the midst of that -no matter what- large or small, that makes your soul catch fire and radiate out of your chest like sunbeams. So strong that others can’t help but feel it! Hold onto that. ❤️

In case you’ve made it this far without familiarizing yourself with the new Bachelorette (shame!), here’s your crash course. Previously a contestant on Juan Pablo Galavis’ season of The Bachelor, Clare famously chewed him out when he sent her home, declaring “I would never want my children having a father like you.” Next, she sought love on Bachelor in Paradise (twice) and once on The Bachelor: Winter Games.

Now, the 38-year-old hair stylist had the chance to call the shots on her own love story — but just a few weeks into Covid-19 safe shooting at La Quinta resort, she fell head over heels in love with contestant Dale Moss, and the couple are now engaged. Oops!

Who Is Tayshia Adams?

If there’s one thing I’ve learned this year, it’s to slow down and work on ME. As life has forced us all to pause, for me personally so much introspection & self development has taken place in last 12 months.⁣⁣ So I’ve decided to end my 20s with a fun goal to push myself to do something I’ve yet to achieve -running a half marathon. ⚡️🏃🏾‍♀️I’m on a 8 week schedule and I have to say my little buns are sore but I’m loving every second of it. And yes as much as life recently has been a rollercoaster of emotions, i couldn’t have asked for a more challenging but rewarding way to end my 20s. I’m learning to be comfortable with getting uncomfortable and I’m falling in love with the woman who isn’t afraid to fail. Anyone wanna join me in training so we can keep either accountable?! 🤣😉

Tayshia Adams first entered our lives as a contestant on Colton Underwood’s season of The Bachelorette, where she made it to fantasy suites before Colton revealed that he’d already made his choice with Cassie. Next, Tayshia went on Bachelor in Paradise, where she had an unlikely romance with the always-goofy John Paul Jones.

A phlebotomist who’s recently taken a career turn toward interior design, 29-year-old Tayshia could be just the thing to save Clare’s season from itself.

How Are They Filming Safely?

#BachelorNation, @RyanSeacrest got all the deets on how, when and where they'll film #TheBachelor & #TheBachelorette amid quarantine restrictions 🌹 Watch back the on-air moment at the link in our bio

Currently, the cast and crew are already on location and quarantining until shooting starts July 16. Fingers crossed that this all goes according to plan.

Where Are They Shooting?

ENTERTAINMENT CHECK: looks like the @BacheloretteABC is filming the next season here in La Quinta at the @LaQuintaResort! The crew is setting up this afternoon and the area is, of course, blocked off to the public. @RealitySteve 📸: @Papi_Nezzy pic.twitter.com/6QUnK6wQ1M

Reality Steve recently revealed that The Bachelorette is filming at La Quinta Resort in California, with another Twitter account confirming and sharing photos of the site blocked off for shooting.

You guys, this is not the La Quinta that you see on the side of the road you can book for $50 a night. This is one of the top resorts out in the desert thats held numerous golf tournaments and is the hot spot during Coachella week. pic.twitter.com/3g6hHhJLFV

La Quinta is a luxury resort featuring no less than 41 climate-controlled pools, expansive spas, salons, tennis courts, golf courses, casitas, hot tubs, and more. As Reality Steve notes, La Quinta is “the hot spot during Coachella week,” and it definitely looks like there are worse places you could be quarantined to shoot a reality show.

One note: Those in the area have pointed out that temperatures can climb well above 100 degrees. Let’s hope these guys can take the heat!

Who’s Coming on the Show?

While Clare’s original suitors were announced back in March, Chris Harrison has since confirmed that there has been a re-shuffling, not least because one of the intended contestants Matt James has now been cast as the new Bachelor lead. While Harrison insists that recasting is solely due to logistical reasons, and that the original 32 men may no longer be available, Clare herself was encouraging new men to apply and the age range of the original suitors rubbed many fans the wrong way.

“The chances for everybody to put their life on hold to be able to come back again [are] very slim, so yeah, we are still casting,” Harrison said on an Instagram Live. “So if you have somebody you think is great for this beautiful woman right here, [apply].”

“I’m just saying there might be new guys only because some of these guys just might not be able to make it,” the TV host later clarified. “I mean, who knows if these guys have jobs now, are looking for jobs, what their families look like. All of our world has been turned upside down, so we’re not going crazy trying to recast the show. I’m just saying we might have to.”

Of course, the cast was further switched up when Tayshia took over as Bachelorette — and so many cast members have now been swapped out, they even banded together to form an Instagram page lamenting the screen time that never was.

As the premiere date fast approaches, we can’t promise there won’t be more last-minute switch-ups. But one thing’s for sure — this season is definitely bringing the drama.

Before you go, check out this ranking of the least popular Bachelorettes of all time. 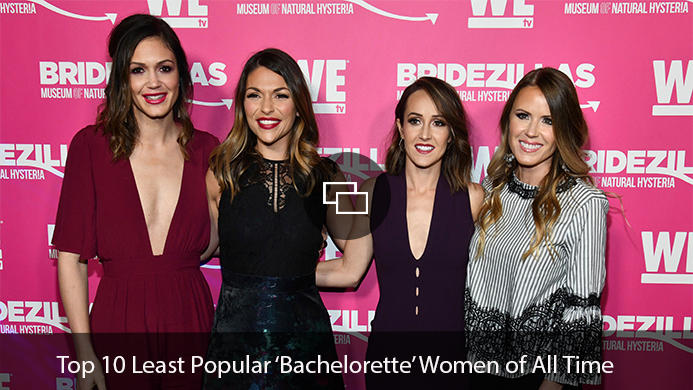