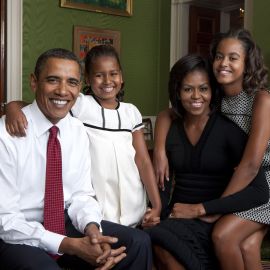 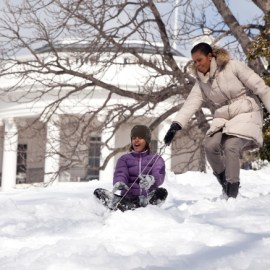 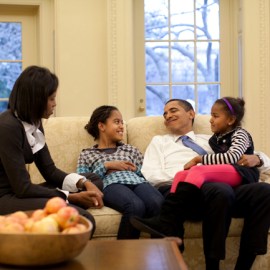 Barack and Michelle Obama have always inspired us with their relationship, one built on mutual respect, admiration, and total trust that their family comes first. But in new Netflix documentary Becoming, released on May 6, the former First Lady is getting exceptionally candid about aspects of their love life we never knew much about — first, their whirlwind college romance, then the tough reckoning that came years later in marriage counseling. Michelle knew from the beginning that Barack was a “tsunami,” and that she’d have to bring equal fire to the table to build the kind of partnership she wanted. But when Malia and Sasha were born, and Michelle found her days (and not Barack’s) mired in childcare, she wasn’t prepared for the advice their marriage counselor doled out.

When Barack first started pursuing Michelle at Harvard, she knew he was a challenge to “get [her] act together” — one she welcomed. “I didn’t want to be swept up and be an appendage to his dreams,” she explained in the doc. “That forced me to work and think and make decisions in a different way.”

“My relationship with Barack was about partnership. If I was going to have an equal voice with a very opinionated man I had to get myself up,” she added later. “I had to set myself off to a place where I was confident that I was going to be his equal.”

Today, I’m thrilled to give you a sneak peek of BECOMING before it premieres on Netflix this Wednesday, May 6. This movie tells my story, from my childhood on the South Side of Chicago to my life today—and it celebrates the stories of so many people I met along the way. My journey has taught me that if we stay open—if we share what’s important to us and listen carefully to what others share about their own lives—we find our strength, and we find our community. I am so grateful to everyone who has shared their story with me over the years. They have inspired me, given me strength, and helped me find my way. I hope you enjoy the film and that it reminds you of the power and importance of your own story. #IAmBecoming

But for all the work she’d done on their relationship, neither was prepared for the shift that would come with having children. “The thing that really changed it was the birth of our children. I wasn’t really ready for that,” Michelle admitted. “That really made it harder. Something had to give, and it was my aspirations and dreams. I made that concession not because he said you have to quit your job but it felt, ‘I can’t do all of this’ so I have to tone down my aspirations. I have to dial it back.'”

While Michelle is clear that Barack never told her to put her dreams on hold, she found herself growing resentful that his life hadn’t change like hers had, and sought marriage counseling to restore the balance in their relationship.

“I took Barack to marital counseling so that they’d fix him and then they look at me and I’m like, ‘why are you talking to me’, Michelle recalled of an early session. But according to her counselors, she had to take back control of her own happiness instead of looking to Barack.

“One of the things I learned that helped me, that helped our marriage was that my happiness is not dependent on him making me happy,” Michelle said. “My resentment for him was that Barack was prioritizing himself. We had babies and he was at the gym and I was like…how do you find time to work out? So let me stop being mad at him for going to the gym and let me find time to get to the gym.”

We have our own thoughts about dads who prioritize fitness over helping out their spouses with childcare — but to be fair, we don’t know much about the situation, and Michelle seems more than happy with how the chips have fallen. It’s a hard truth that, no matter how equal a partnership is, having kids can often result in mothers having their lives more drastically changed than their partners, and it’s empowering to see that Michelle recognized that imbalance and worked her way through it.

Your story is your power.

Often, it’s not just the physical labor of childcare that makes women feel overburdened, as Michelle points out. It’s also the instinct to put your personal needs behind those of the family — and placing equal importance on your own need to go to the gym as the other needs of the household. Of course Michelle wanted the support of her husband. But in marriage counseling she realized the same thing she’d realized in college all those years ago: to feel like a strong, confident equal to Barack Obama, she was going to have to get herself just as strong and confident in return.

The result? A woman who tirelessly fights for her own rights and everyone else’s. Once again, we have so much to learn from this couple.

Before you go, check out these photos of Sasha and Malia Obama growing up before our eyes.