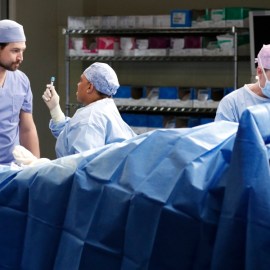 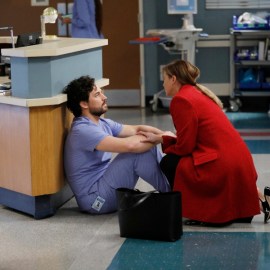 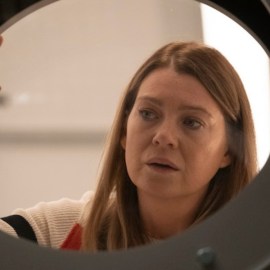 Grey’s Anatomy (finally) said goodbye to Dr. Alex Karev last night, after announcing in early January that actor Justin Chambers was leaving the show. While Chambers’ last episode aired in November, fans have been eagerly awaiting a proper farewell episode and an explanation for why his character would suddenly disappear. Well, as last night’s episode revealed, Alex had in fact run off to Kansas to reconnect with old flame Izzie, who secretly had his twins five years ago. He tells everyone (including wife Jo, along with divorce papers) in a series of letters explaining that he’s happier than he’s ever been.

Fans have been airing their frustrations on Twitter since the episode aired, and reactions range from total disbelief to outrage. The most common complaint is that Alex would never leave wife Jo — and if he did, he definitely wouldn’t do it via letter (or for Izzie Stevens).

I can’t believe they managed to ruin 15 years and 16 seasons worth of character development in one episode. Alex sweetie you didn’t deserve this #GreysAnatomy pic.twitter.com/BkoVXkQCGC

SHE HAD HIS KIDS AND IN THOSE 5 YRS SHE COULDNT PICK UP THE PHONE TO LET HIM KNOW HES A FATHER BUT HES STILL JUST GONNA DROP HIS WHOLE LIFE FOR SOMEONE WHO ABANDONED HIM YEARS AGO AND HID HIS KIDS FROM HIM?? #GreysAnatomy pic.twitter.com/P8xc1Lqouh

While fans had at first been worried the show would kill him off, this ending was somehow worse. Alex was trapped in an unhealthy relationship with Izzie, and a huge part of his character growth had been watching him find a healthier relationship with Jo. Fans couldn’t wrap their heads around the idea that Alex would suddenly regress like this, returning to a woman who had caused him so much pain, and now (apparently) hidden his children from him for five years.

alex karev leaving jo for izzie and suddenly having two kids with her makes no sense so i'll just ignore that storyline for my mental health pic.twitter.com/O4OT9RauTn

alexander with fucking
karev has a son izzie stevens
and a daughter #GreysAnatomy pic.twitter.com/FBGtkeyUWW

me: THEY BETTER NOT KILL ALEX OFF, I SWEAR

me this week: …….they should’ve just killed him off…..#greysanatomy pic.twitter.com/DRlD10cx7w

But who is REALLY Alex Karev’s soulmate?

Retweet for Izzie Stevens
Like for Jo Wilson pic.twitter.com/l12QCXYgBN

No matter how you felt about it, last night’s episode was emotional — and everyone would have preferred to actually see Alex one last time. If you need us, we’ll be rewatching Alex and Jo’s wedding on repeat.

Need more Grey’s Anatomy drama in your life? Check out the most shocking moments from every Grey’s finale over the years.