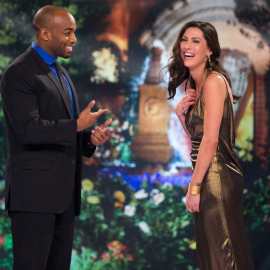 If you have doubts about ABC’s next rose-giver casting, consider this: New Bachelorette Clare Crawley just shared her dream guy qualities, and they include a “dad bod” and scruffy face. So, like, she is us and we are her, right? Even if you don’t share Crawley’s penchant for a man tender in both heart and midsection, we can at least probably all agree that it’s nice to have a Bachelorette who seems to be looking for something — dare we say it? — real.

Speaking to People, the 38-year-old hairstylist emphasized that “the most important thing I’m looking for is someone who can be vulnerable and open.” For Crawley, that means finding a partner who is decidedly more mature than previous seasons’ crop of 20-something-influencers and, let’s be real, f**k boys. “I want a man comfortable in stuff he’s been through and self-aware enough to know what he’s learned,” Crawley explained. “I need a level of maturity for sure.”

To that end, Crawley isn’t looking for someone who obsesses over how they look (or how she looks, for that matter). “Somebody who is more concerned with meal prep or what I’m eating is not attractive to me. I love a dad bod! You need balance in life.”

Also on Crawley’s dream qualities list? She adores “a good scruff” and is “a sucker for a tall guy.” Ultimately, though, she plans to dig deeper. “Personalities are what attract me,” she shared. “Whatever that looks like, I’m ready for it!”

That’s not to say Crawley isn’t going in with her eyes wide open. She’s fully aware of the fact that contestants on the franchise are often outed for having ulterior motives. “I’m anxious about that,” she admitted, adding, “I get that there are a lot of perks that come along with being on The Bachelorette, but in the end, I just want a man I can bring home and watch TV with on a Friday night, who doesn’t want to be in the spotlight.”

That might sound naïve, but Crawley is no stranger to this whole song-and-dance. She’s appeared on the franchise four times already, even becoming the quote-unquote runner-up in the Bachelor season of Juan Pablo Galavis (oof at that guy, eh?). Still, Chris Harrison rocked Bachelor Nation on Monday by confirming Crawley as the newest leading lady of the franchise.

So far, Twitter seems divided over whether a contestant who’s appeared on the franchise so much should be placed at the helm of their own season. But according to Crawley, it’s her life experience — including previous stints on the franchise — that make her uniquely prepared for what’s to come on her own season.

As she told People, “I’ve gone through a lot of twists and turns in my life. Things I’ve thought I wanted in the past have turned out to not be what I wanted. But now I know what I will and won’t put up with.”

Click here to learn surprising behind-the-scenes secrets about The Bachelorette.