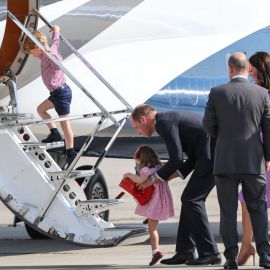 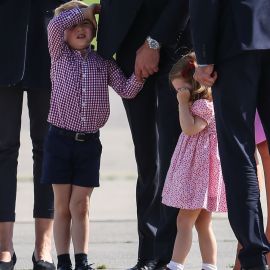 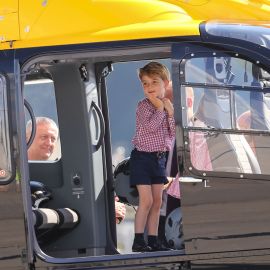 From the sound of it, Prince George and Princess Charlotte’s February school break got a bit hairy. Or should we say woolly? The oldest children of the Duke and Duchess of Cambridge returned to the current term at Thomas’s Battersea school in London on Monday. But it sure sounds like they squeeze a lot of fun into the time they had off — and that fun included farm animals.

The Cambridge family cleared their schedules last week to take advantage of the short break and headed out to Anmer Hall, their country home in Norfolk. On Saturday, Prince William offered a little insight into what he, Kate Middleton and their kids have been up to while the little ones are momentarily free of classes and schedules. “We’ve been lambing with the children this week,” he revealed, per Hello! Magazine. “Charlotte wasn’t sure at first, but George was straight in there. Louis loves the tractors. They love seeing the lambs and feeding the lambs.”

This isn’t the first time William has alluded to the young Cambridges’ fondness for the farm life. Last October, in a documentary, focused on his father’s 135-acre estate, the Duke of Cambridge said, “I should have brought George today. He would absolutely be loving this… He’s obsessed [with tractors].”

“I’ve got this one photo of Charlotte smelling a bluebell, and really for me it’s moments like that mean so much to me as a parent. • I try every day to put moments like that in, even if they’re small or even if I don’t have time”. • Swipe 👉 to listen to The Duchess of Cambridge speaking about her experiences as a parent on the ‘Happy Mum, Happy Baby’ podcast with @MrsGiFletcher. On the special podcast, The Duchess spoke about the importance of the early years, and about her landmark ‘5 Big Questions on the Under 5s’ survey. It takes just 5 minutes to have your say in the biggest ever conversation on early childhood — visit the link in our bio to answer The Duchess’s #5BigQuestions. Photo © The Duchess of Cambridge

Kate also recently spoke about her family’s affinity for spending time in the great outdoors. “I think it’s so great for physical wellbeing and also mental wellbeing and actually really laying those foundations,” she told Happy Mum Happy Baby podcast host Giovanna Fletcher. “But it’s such a great environment to actually spend time building those quality relationships without the distractions of, ‘I’ve got to cook’ and ‘I’ve got to do this’ and actually, it’s so simple.”

In fact, the royal mom-of-three was probably in heaven this week at Anmer Hall with her kids. When asked by Fletcher when she’s the happiest, Kate gushed it was when “I’m with my family outside in the countryside and we’re all filthy, dirty!”

Click here to see cute photos of Prince George and Princess Charlotte during downtime in Europe.