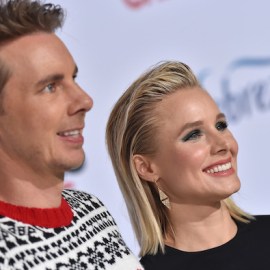 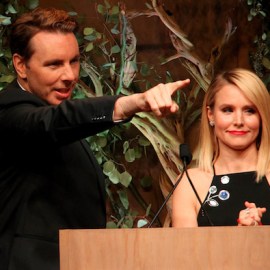 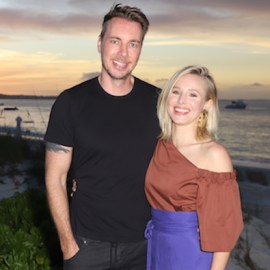 It’s always heartwarming to see kids who aspire to follow in their parents’ footsteps — and that seems to be a particularly common trend in Hollywood. While Kristen Bell and Dax Shepard’s daughters Delta and Lincoln are still very young (just a year ago, these two entertainers are already thinking ahead to seeing their kids in the spotlight. They have their concerns, as any parent would. But in the end, they recognize that acting has been an amazing career for both of them, and they’d never want to hold their daughters back from reaping the same rewards.

Bell and Shepard spoke with E! News about their baby product company Hello Bello, and got into how they’d react to their own young daughters wanting to pursue acting. “I think acting is a great job if you can find employment,” Shepard joked. “There are a lot of actors who don’t want their kids to go into that as adults and I assume those actors haven’t had real jobs because they’re lousy for the most part. I roofed and washed cars and de-tasseled corn. Acting is much nicer.”

Bell was slightly more hesitant, knowing that the entertainment industry can be brutally competitive and filled with rejection. But she’s come around to Shepard’s way of thinking.

“I had the initial instinct to keep them away from it, but that’s simply because I think about the rejection and what the spotlight can do to your personality,” she said. “But then Dax politely explained to me, ‘Well do you enjoy being creative?’ I said yes. He said, ‘Do you enjoy being overpaid?’ And I said yes. And he said, ‘Why on Earth would you not want that for our children?'”

Whether or not Bell and Shepard are on board, they also recognize that this will ultimately be up to 5-year-old Delta and 6-year-old Lincoln to decide. “The reality is they are their own unique organisms.”

She thinks her dad's cool. That'll change in a few years, so I'm relishing every single second of it while it lasts. We had so much fun getting muddy yesterday. Second weekend in a row a powerwasher was required. Life is good. #rzrlife

And if one of them does get the acting bug and make it big, which parent will take the credit? Bell says she and Shepard will duke it out over who passed on what to their daughters. “When they’re being great, I’m like, ‘They take after me.’ And when they’re being awful, I’m like, ‘See?! She’s just as hard headed as you are!’ And then he does the exact same thing.”

We can totally picture that fight — and we’re suddenly very interested in the idea of a reality show based on their home life. Maybe when Delta and Lincoln are a little older? Just a thought.

Click here for all the best relationship advice from Kristen Bell and Dax Shepard.