Remember the happiness and joy that filled Outlander’s Season 5 premiere episode? Yeah, that’s gone. The second episode opens up with an old fashioned tar and feathering — which I guess back then was considered new and not old fashioned. Either way, not a fan.

Murtagh gets all murdery. He and his men pour burning tar and fluffy feathers on the bare skin of their enemies. There’s a lot of screaming, and Murtagh tells them they deserve it. Here are seven other takeaways from the episode, too:

Cut to Brianna sketching under a tree — uh oh, she’s sketching Stephen Bonnet. Her dark drawing session is interrupted by the screaming arrival of a woman and her dying husband. Thankfully, Dr. Claire is in the house. The wife tells Claire she gave her husband mercury pills. Claire says there’s nothing she can do. “Because you fed him mercury, you idiot.” She didn’t actually say that, but I heard it.

Meanwhile, Jamie’s busy riding with the enemy. He’s set off to find Murtagh with some Red Coat babysitters in tow. One being his new fake best friend, Leftenant Hamilton Knox. Let’s call him Lefty. He compliments Jamie on being able to bring people together. *Bromance alert.* Except, oops, the bromance is halted when Jamie’s new BFF says, “I can’t wait til we hang Murtagh Fitzgibbons.” Insert Jamie’s disappointment here.

Claire Doctors It Up

It turns out Claire loves playing “Operation” on dead bodies. The mercury dude who died on her table? She’s performed an autopsy on him. Bree enters, almost barfs, and is like, “Mom, wtf?” Claire explains it’s the only way to save people. Claire then sees Marsali cutting up an animal carcass, and she’s like, “Oooh, idea.”

Jamie sees firsthand what Murtagh and his men did. He isn’t super happy with their tar and feather skin care regimen for the Red Coats. The Highlander prisoners are shocked to see Jamie with the enemy. He tries to tell them he’s on their side, but they’re like, “We regret nothing, only that we didn’t give everyone a tar bath!”

This angers Lefty, who whips out his sword and kills one of them. Jamie’s pissed. Later, Jamie breaks the Highlanders out of jail. Lefty tells Jamie, they must prepare for war. Dum dum da dum. And then we don’t see Jamie for the rest of the episode. I assume he’s riding his new pretty white horse back to Claire.

Roger can’t do anything right. Bree tries to teach him how to shoot. He aims at a tiny squirrel and misses. He tells Bree it reminds him of “Tufty Fluffytail” — Sorry, Tufty WhatTail? He explains, “Tufty Fluffytail” was an English character who taught children about road safety. So that’s why he missed. 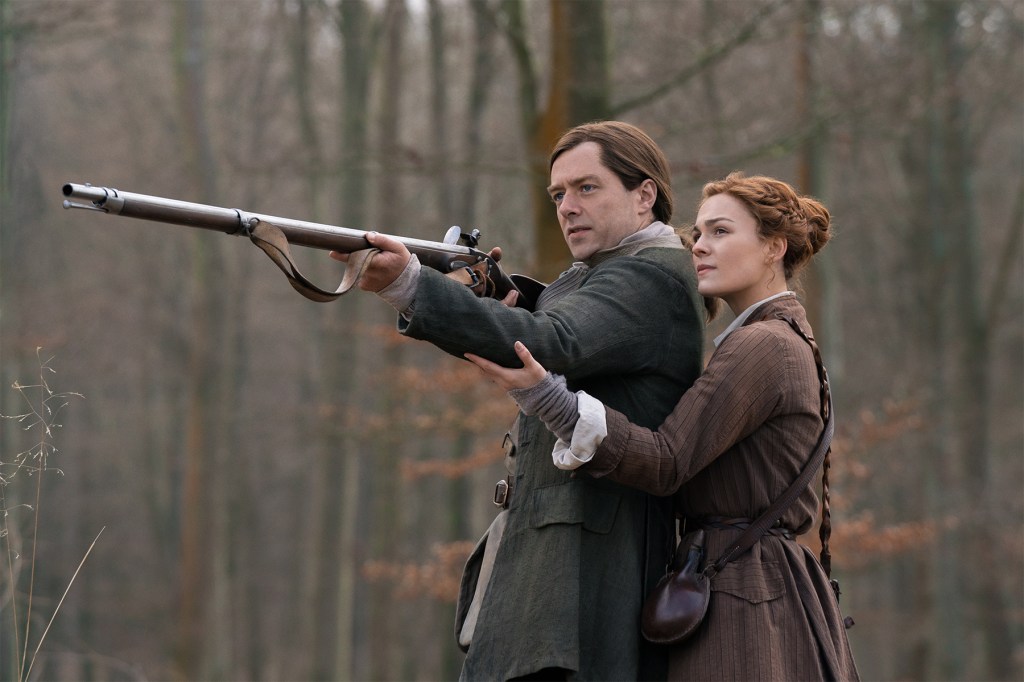 He then whines about Jamie not respecting him. (Note: You have to earn that, Roger). Bree then has him shoot a tree. He misses. Then a turkey. He misses. Bree shoots the turkey in one shot. Happy Thanksgiving. Guess whose ego can’t take that his wife is a better shot than him? ROGER. He quickly turns into Pouty McFluffyTail.

Bree quickly figures out Roger wants to head back to the future. “Our family is here,” Bree says. Roger responds, “You and Jemmy are my family. James Fraser is my colonel.” Cold Roger. And now I like you even less than before. Who knew that was possible?! Bree responds, “What about Mama?” Roger then says, “You don’t want to leave them.”

The best scene of the episode goes to Claire and Marsali. After the funeral for mercury man, complete with a song by Roger, (I fear Roger will sing every episode), Claire decides it’s the perfect time to recruit Marsali. She asks Marsali if she trusts her. Marsali is all, “Ay Claire.” Marsali will soon regret that because Claire’s about to show her a dead body. 3, 2, 1 ‘til Marsali freaks… Yup.  She screams, “Lord have mercy!” And Claire muzzles her with her hand (lol).

Claire:  UGH NO, I’M NOT A WITCH, put your brain on Marsali!

Marsali:  Wait, hold up, who did we bury?

Claire: No one, Roger and I filled the coffin with rocks.

Marsali is hella confused. Claire explains, “We can learn from this body to help save people, and you’d be a great apprentice.” Marsali did not expect this creepy job offer but she’s intrigued. Claire shows her the dead body, all cut up, and Marsali says, “Listen Claire bear, I can’t defile bodies like this,” and Claire explains it’s just an autopsy. Hook line and cadaver. And just like that, Claire has an apprentice. Claire and Marsali might be the 18th century “Thelma & Louise” we need.

Sidenote: Caitriona Balfe and Lauren Lyle have excellent chemistry and are very entertaining together.

Later, Claire hears a lady say that her son’s male physician had him ingest some powder for a hand burn. Claire tells her that’s poison. “Dr. Wilson is a fine physician,” she responds, and patronizes Claire for being a little healer woman. So Claire decides to take on a male doctor pseudonym, Dr. Rawlings. Smaht Claire, smaht. Interesting fact: “Harry Potter” author, J.K. Rowling, was told by publishers to abbreviate her name so people would think she was a man, as they thought the book had a higher chance of selling with a male author. SO in conclusion, not much has changed. Women still need to pretend to be men to be taken seriously.

Claire and Roger bond when he has Claire check his eyesight to figure out why he can’t shoot things. He tells Claire that Bree wants to stay with her family. Claire tells him she wants them to go back to the future so they are safe, even though she’d miss them terribly. Hmmmm. Me thinks Jamie will have a different opinion. Roger says they need to wait to see if Jemmy can hear the stones and time travel, too.

Murtagh vows revenge. I wish Murtagh would be less murdery. He’s ultimately mucking things up for Jamie and Claire. And Murtagh, if you are responsible for them being separated for any amount of time again, we will have words. This Murtagh/Jamie battle won’t end well.

So Claire loves bread, apparently. The house helper thinks she’s gone carb crazy, and calls Bree in to look at her mom with all the loaves.

Claire’s just letting the bread go moldy, because she’s trying to make penicillin. Inventing penicillin 157 years before it’s supposed to be? Not cool, Mom. Bree thinks her mom is playing God. Have you met Claire? She is God. Claire tells Bree she does not give a crap about time, space or history. Bree agrees and helps her mom break that bread. Carbs really do bring people together.

Roger finds Bree’s sketches of Bonnet. He is shook. Bree screams. Jemmy has started walking. And as Roger looks at his walking wee man, we are reminded that he might not be Jemmy’s father. Crazy Stephen Bonnet might be.

And where is that sunnnofabeech Bonnet? At an 18th century female fight club, of course. Before we know it, Bonnet challenges a man to a pointy stick duel and of course he wins, and then cuts the eyes out of the man and leaves him alive. But not before telling everyone, “I’m a father now.” Ruh-roh. Still a psycho. Can’t wait til someone kills Steve Bon Bon, preferably a Fraser.

Overall, it was a good episode that sets up a lot of storylines, though Claire and Jamie do not have one single scene together. Outlander, we’ve had this talk already.

NEXT WEEK: *SPOILER: Jamie tells Claire, “Stephen Bonnet is alive.” They both incorrectly believe that Brianna doesn’t know this fact. However, the episode seems to be very Jami-and-Claire-together heavy. It looks like they enter some horror house where someone yells don’t go up to the attic, and of course Claire does. Nothing will go wrong.