Bachelor alum Catherine Guidici (now Lowe) knows a thing or two about falling in love on television. After all, the mother-of-three nabbed the final rose during Sean Lowe’s season of The Bachelor and the two are still going strong today. So when she sat down with us to talk about the drama that’s been going down on Peter Weber’s season, she made sure to share some insight on who she thinks the 28-year-old will pick.

Our last picture as parents of only two children ❤️ I am so grateful for this man. He’s been my partner every moment and he’s the best daddy to our sweet angels. Just an appreciation post. Plus, I look cute

“There really are some great options. Really are people he could spend the rest of his life with,” she said, adding that contestant Madison Prewett, who landed the first one-on-one date of the season, caught her eye. “I’ve seen how comfortable he is with Madison. Like, he had a really hard day and he went to Madison and they were touching foreheads and talking about things as if that didn’t just happen. Madison is someone I’m looking at because he’s just so drawn to her and so comfortable.” 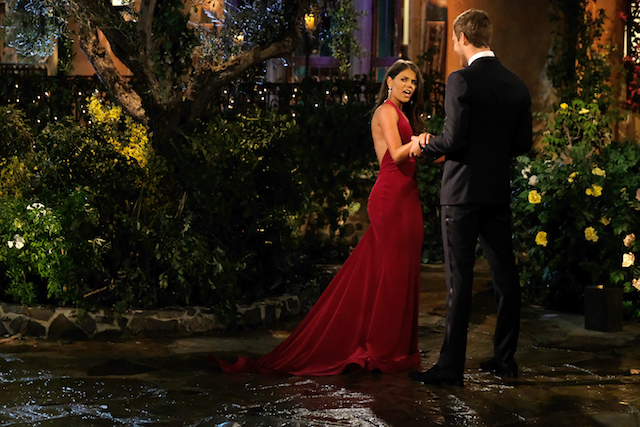 Lowe also named Victoria Paul as a contestant she has her eye on because she “seems sweet and he’s taken to her a lot,” but added that she’s not ruling any of the women out due to lack of air-time. “I didn’t always show up until Episode 4 of my season [so] I can’t really rule anyone out. But I know there are some really nice girls,” she said.

But not everyone has come across as a nice girl so far this season. In just three episodes, there has been plenty of drama — most recently centered around pageant queen Alayah Benavidez, who has been rumored to be manipulative and insincere with Peter. Plenty of women have spent their time with Peter talking negatively about Alayah, and according to Catherine, that’s not the way to play the game.

“I don’t think Alayah did anything wrong but all the girls did have a similar take on her. I just didn’t see anything that needed to shine a light on when you have 2-3 minutes with this person and you choose to spend it talking about someone else and I know firsthand that that’s not something I chose to do,” she said.

“If you have a genuine concern about someone I get why you’d bring that up,” she continued, adding that the women have gotten a little out of hand with talking about one another to Peter. “I think it steers the conversation in a way that isn’t productive.”

Catherine and Sean tied the knot in a televised wedding in January 2014. They’ve since welcomed three beautiful children, Samuel, 3, Isaiah, 1, and newborn baby Mia who have joined mom in going dairy-free with Kite Hill.