She’s proud of that bump. Married at First Sight star Jamie Otis, who’s currently expecting baby No. 2 with husband Doug Hehner, recently took to her Instagram Stories to share a photo of her growing belly — in the nude!

Related story Meghan Trainor Shared the Moment She Found out She Was Pregnant, & Now We are Emo

“I finally have a real bump when I wake up,” she captioned a video herself where she’s seen proudly standing naked while covering her breasts.

“I just have to show you. Last time I was in L.A., I had no bump and now I have a really really big one,” the reality star says in the clip, grinning from ear-to-ear over her changing body. “I absolutely love love love every second of it. Ugh, it’s the best.” 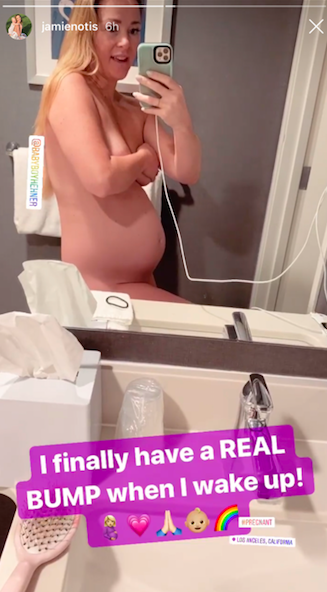 That growing baby bump is certainly the light at the end of the tunnel for Jamie and Doug, who have had their fair share of pregnancy struggles over the past few years. The couple lost one child, a son named Johnathan, before welcoming daughter Henley in 2018, and suffered multiple miscarriages before confirming they were pregnant with their second child in September 2019.

Back in November, the former Bachelor star revealed that her second child has been “worth the wait” and though she’s always nervous to experience pregnancy complications due to her rocky past, she’s confident that her little one on the way is going to arrive safely.

Tears of JOY!😭 WE MADE IT TO OUR SECOND TRIMESTER!👏🏻🤰🏼👶🏼🌈 I used to think that meant we are in the clear, but after losing our first born son, Johnathan, at 17 weeks we know to be cautiously optimistic.👼🏼💙 BUT, I’ve had zero issues with cramping/bleeding with this pregnancy so that makes us feel *so* confident! Our angel baby is watching over this little one.🙏🏻 • Last weekend we saw this new blessing bouncing around in my belly – so happy & HEALTHY🙏🏻 At one point it even looked like he/she was sucking his/her thumb!😭💗 • Gosh, Its such an emotional rollercoaster being pregnant after a loss bc the memories of Johnathan at this very stage come flooding back. We still have a dvd of him wiggling around inside me seemingly healthy & strong just like this baby now … but just a few weeks later I was kissing his tiny face goodbye.😰 • If you’re a mama who is also pregnant after a loss, you’re not alone with all the fears. I try not to talk about mine bc I don’t want to focus on that — or sound crazy🤪 — but they’re there.🤷🏼‍♀️ And I’ve realized over time it’s better to be honest and share our reality rather than just pretend to be “normal” bc that is SO isolating and lonely. Sooo, if you’ve had a loss or if you’ve been trying to conceive and it just hasn’t worked out, we’ve been there too. It stinks. I’m so sorry, the pain is excruciating at times & sometimes it seems like no one really gets it.😕 • BUT I want you to know that after 18 months of trying and two early losses back to back, we are pregnant again and this little one is STICKING!👶🏼🌈 It always helped give me hope when I heard about other rainbow baby stories so I’m sharing mine with you in hopes it’ll give you faith for you & your family, too.🙏🏻💗 • We captured a vid of this little nugget rolling around inside me & put it on our @hotMarriagecoolparents YouTube page. We’re going to vlog this whole journey.🤰🏼 It’s incredible to see the little facial features forming and see the hands/feet sprouting out.😭👶🏼🌈 link in bio if you wanna see.❤️ • • #secondtrimester #13weekspregnant #rainbowbaby #miscarriageawareness #ttc #hope #pregnant #pregnancyjourney #bumppic

“WE MADE IT TO OUR SECOND TRIMESTER! I used to think that meant we are in the clear, but after losing our first born son, Johnathan, at 17 weeks we know to be cautiously optimistic.👼🏼💙 BUT, I’ve had zero issues with cramping/bleeding with this pregnancy so that makes us feel *so* confident! Our angel baby is watching over this little one,” she shared on Instagram.

The pair — who first met and fell in love during season 1 of Married at First Sight — are also busy figuring out what to name their baby boy. “We have both agreed that we DEF want an H name to go with big sissy, Henley,” Jamie revealed. “We’ve narrowed it down to Hendrix, Hayes, Hudson, and Hunter.”