We weren’t exactly worried about Meghan and Harry staying unemployed, but we have been wondering what their financial independence might look like. Meghan reportedly has aspirations of directing and producing documentaries, but what else might be on the former Suits star’s horizon?

The truth is, Meghan’s always been able to support herself as a working woman — and it does seem like the job offers are pouring in a tad more for Meghan than they are for Harry. So, will Meghan use her US connections to get Harry a job stateside? Or will he join her on one of the inventive new gigs she’s been offered?

Let’s take a look at all the crazy job offers that have been pouring in for Meghan.

The Simpsons showrunner Al Jean told RadioTimes that he’d be happy to have Meghan come do voiceover work on the show any time, after news spread that Harry had been chatting up Disney with a similar proposition. “I hear she wants to do voiceover work, so if they’re reading this, give us a call,” Jean said.

Celebrity endorsement company Sheeraz, Inc (also known as Fame by Sheeraz) most recently made headlines with an Instagram post stating that they were accepting appearance requests for Meghan and Harry. “Sheeraz, Inc is now taking appearance and endorsement requests for Prince Harry and Meghan Markle @sussexroyal,” they wrote. “Sheeraz, Inc clients from Middle East, India, US and Asia can send us official offers and we will take them directly to their representatives.”

Buckingham Palace has since denied that Meghan and Harry are involved with the company, whose other star clients reportedly include Kim Kardashian, Jennifer Lopez, and Lindsay Lohan. 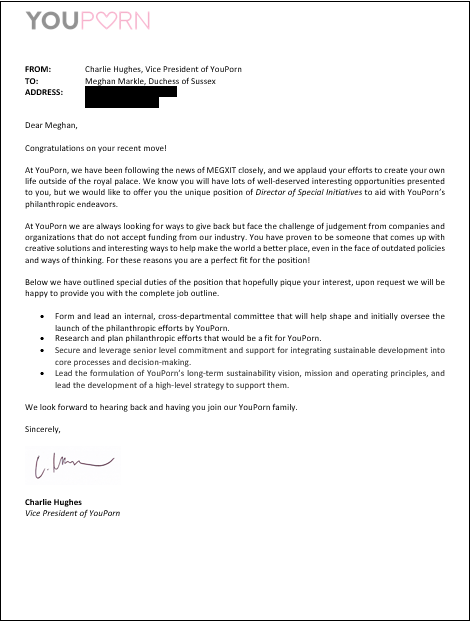 Burger King Argentina jumped on the news of Megxit early, Fox News reports. They released an ad campaign soliciting the departing royals: “Dear Dukes, if you’re looking for a job, we have a new crown for you,” one slogan reads. The company also released a letter: “We have a proposition for you: Do as thousands of people [do] and take your first steps in the world of work with us. You know that the crown will suit you perfectly. Also, after so many years of living as dukes, it is time for you to start eating like kings.”

Later that week, Burger King US got in on the fun, tweeting: “@ harry, this royal family offers part-time positions.”

As we all know, Meghan recently accepted a voiceover deal with Disney in exchange for a donation to Elephants Without Borders, a wildlife conservation organization. TMZ reported that Harry sold Disney CEO Bob Iger on Meghan’s voiceover skills at the Lion King premiere in July, which means the entertainment giant has been conspiring with the Sussex royals for some time now. While this round of voiceover work will be for charity, we wouldn’t be at all surprised to find out Meghan has future paid gigs lined up with the company.

"We have an office waiting for them in the animation studios building should they be looking to produce television." ABC Entertainment president Karey Burke in response to the Prince Harry and Meghan Markle news while at the network's TCA press tour https://t.co/oCWS8pMPL5

And if things go sour with Disney, Harry and Meghan have other TV options on the horizon. ABC Entertainment president Karey Burke is ready to offer the Sussex duo a job, reports The Hollywood Reporter. “We have an office waiting for them in the animation studios building should they be looking to produce television,” Burke said, shortly after the news of Megxit broke.

We have no doubt the offers will keep coming — with Meghan’s many skills, this next chapter is full of possibility for the the retreating royal. No matter what she chooses, we’re sure she’ll do great things.