Still mourning the loss of the Lizzie McGuire reboot? We have some news that may cheer you up. Hilary Duff-led Younger is getting a sequel novel due out in July 2020 — and we have a sneak peek at the cover. Pamela Redmond’s 2005 novel Younger was adapted into the TV Land series in 2015, and her sequel, Older, is a much-needed followup.

Produced by Sex and the City creator Darren Star, Younger has aired six seasons so far and was already renewed for a seventh. The series, like the book, tells the story of Liza Miller, a 40-year-old who faked her way into a publishing job by pretending to be a 20-something. Redmond’s sequel, Older, picks back up 10 years after Younger left off — and our heroine Liza is in quite the dilemma.

Author Pamela Redmond talked exclusively with SheKnows about what we can expect from Older — here’s what we found out. 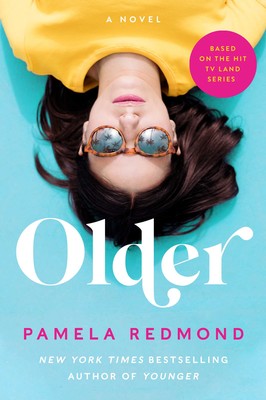 Per the official description from Simon & Schuster, Older catches up with Liza Miller at age 50, when her “thinly veiled novel about a woman posing as a millennial” gets picked up and turned into a TV show. Liza heads to Los Angeles to work on the pilot, leaving behind her boyfriend, best friend, and daughter — but finding a mysterious new crush on the opposite coast. The tagline says it all: “New York or Los Angeles? Romance or commitment? Younger… or older?”

Redmond, founder of baby name website Nameberry, exclusively spoke to SheKnows about how Liza has grown between Younger and Older, and how the sequel expands on the big questions of the novel. “In Younger, Liza deals with the challenges of age and ageism by avoiding them completely and pretending she’s younger,” Redmond explains. “In Older, she no longer has this option and wouldn’t want to pretend to be younger again even if she could get away with it.”

“She writes Younger as a way to tie a bow on that period of her life with the idea of moving on and living more honestly,” Redmond adds. “But Younger is published as fiction and Liza is unwilling to admit it’s the truth. Which raises the question: What else is she still hiding, from the world and from herself?”

Redmond describes herself as “fascinated by issues related to women, age, motherhood, and professional life” — and Older gave her the opportunity to explore those issues from a new angle. “Women in their 20s are supposed to be building their careers at the same time as they’re trying to find a mate. Women in their 30s face a lot of questions around children: Are they going to have them, and should they step back from the work world and stay home? The 40s are often about the issues Liza and Maggie faced in Younger: If you’ve been home with kids, how do you go back to work, and if you’ve been focusing on career, are you going to have a kid before it’s too late?”

Redmond continues, “At 50 and beyond, if you’re really lucky you’re enjoying the benefits of a mature career and a stable family but you also might get pushed out of your job, you become invisible to men, your kids leave home and your marriage might unravel.” As Liza Miller enters her 50’s, she’s facing a new world — and readers will get to go on that journey with her.

“Women at every age are facing different pressures today than our mothers did,” Redmond notes. “We need to be talking about all these new questions around age, whether we’re 26 or 40 or over 50. Younger started many of those conversations and Older brings them to a new level.”
The silver lining to this hotly-awaited sequel? The Younger TV show should have at least another few years of content — so whether or not Lizzie McGuire is picked back up, Duff won’t be leaving our TV screens any time soon.