Another decade has passed, and we can probably all agree that the 2010s brought about a lot of change — some good, some not-so-good and plenty of meh. But for Meghan Markle, the past decade saw her go from a struggling actor to actual royalty. Outside of Mia Thermopolis, it’s not a journey most people make in a 10-year timespan.

But this isn’t another installment of The Princess Diaries (although shout-out to the fans… you are our people). Meghan made this fairytale transition in real-life. Of course, no one could have predicted the teen who once posed in front of Buckingham Palace as a tourist would one-day end up in the royal family. So, it’s understandable if the early years of Meghan’s last decade aren’t quite as memorable to you. Back then, no one knew to pay close attention to her beginning because, well, no one really knew the early 2010s were the beginning of anything for the now-Duchess of Cambridge.

Which is why we want to take a little stroll down memory lane. What happened over the last decade to take Meghan from relative anonymity to one of the world’s most recognizable royal faces? Join us for this nostalgic journey and, hey, keep the hope. If it can happen for Meghan and Mia, maybe it can happen for us, too.

ppl forget that Meghan Markle was a deal or no deal briefcase lady pic.twitter.com/lNTARGRson

By the time 2010 rolled around, Meghan had already been acting professionally for years. Everyone knows (now) about her stint as one of the briefcase models on the popular game show Deal or No Deal. What you may have missed, though, were her bit parts in shows like CSI: NY (2006), Fringe (2009) and CSI: Miami (2010). The first year of the decade was especially significant for Meghan because it marked here initial breakout from cameo actress to screen star — it’s the year she added the films Get Him to the Greek and Remember Me to her resume. Here visibility enjoyed a serious uptick.

Then it happened. Meghan booked the role that would really put her on the map: beautiful and smart paralegal Rachel Zane on the USA Network’s Suits. She starred as the love interest of the series’ lead, Mike Ross (played by Patrick J. Adams), and held that role until 2018.

As Meghan’s star continued to rise, she began making more publicized appearances. That included red carpet photo opps like this event for the network, for which she wore a slinky tone-on-tone mauve number. 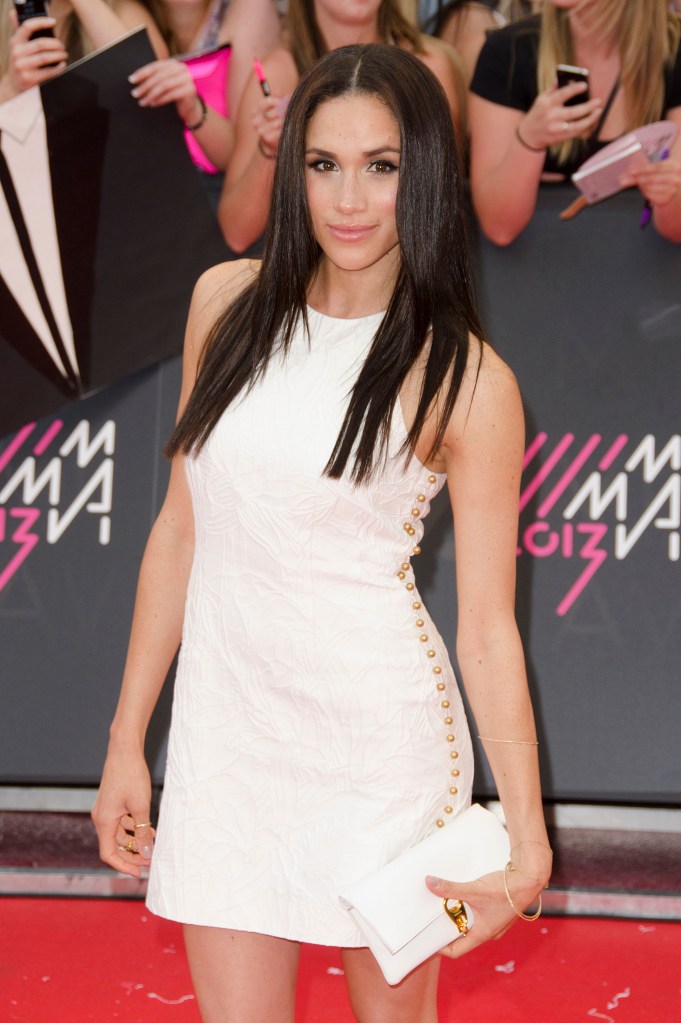 The Suits star further solidified her fashion “it girl” status by wearing an edgy mini-dress to the MuchMusic Video Awards in Canada on June 16, 2013.

Nearing the middle of the decade, Meghan did two things that actresses sometimes do when they’ve achieved a certain level of fame. She made a be-seen appearance at New York Fashion Week, and she launched a lifestyle blog.

The latter she called The Tig, which came from her favorite kind of wine: a full-bodied red created in Tuscany called Tignanello. There, she wrote about everything from fashion and beauty to food and travel, all with her trademark warmth and charm. As the site got bigger, she interviewed experts and profiled inspirational women. It was like Goop with less pretention.

At the same time Meghan was building what one can only assume would have become a full lifestyle empire, she began seeing celebrity chef and restaurateur Cory Vitiello. The romance proved relatively low-key, or at least it seems that way now considering the media hoopla surrounding Meghan and Harry. However, both Vitiello and Vitiello’s mother have since revealed the relationship was, in fact, serious and that Meghan was a lovely person. The couple ultimately decided to call in off after nearly two years together.

In the Princess Diaries version of this movie, Julie Andrews would have been the benevolent hand of destiny who brought Meghan and Prince Harry together. In real life, as it were, the two were set up on a blind date by a mutual friend (rumored to be PR director Violet von Westenholz, pictured above).

A relationship between Meghan and Harry sparked outside of the scope of the public eye.

Meghan officially folded The Tig in April, leaving a short letter on the landing page for her followers: “After close to three beautiful years on this adventure with you, it’s time to say goodbye to The Tig. What began as a passion project (my little engine that could) evolved into an amazing community of inspiration, support, fun and frivolity. You’ve made my days brighter and filled this experience with so much joy. Keep finding those Tig moments of discovery, keep laughing and taking risks, and keep being “the change you wish to see in the world. Above all, don’t ever forget your worth—as I’ve told you time and time again: you, my sweet friend, you are enough.”

Of course, by now it was pretty obvious Meghan and Harry were dating. So, the internet went wild with speculation that Meghan had to shutter the site because the royals were grooming her to become part of the fam. And on November 27,  at least one-half of that rumor proved to be true. She would become a royal, because she and Harry were engaged! The “girl next door” was a girl next door no more.

Meghan and Harry cap off their fairytale romance with a fairytale wedding held at St. George’s Chapel, Windsor Castle on May 19. The wedding itself spoke, in many ways, to Meghan’s real-girl, non-royal lineage (the pastor, in particular, was buzzed about). And voila! Meghan’s Mia Thermopolis metamorphosis became official before the decade even finished. At this point, it would make our life to learn Genovean pears do exist and were served at the reception.

Click here for a timeline of  Meghan and Harry’s relationship.