It’s not a stretch to think that someone’s child might closely resemble them. That’s the gist of genes, obviously. But it’s always fun when someone gives birth to a child that could basically be their twin, especially when that doppelganger is a celebrity kid. Will they follow in their famous parent’s footsteps? Will they embrace their “lookalike” star status?

Related story These Daughters Look Just Like Their Famous Moms

This sort of carbon-copy-thing is especially cool if you consider the fact that — because of all the possible gene combinations — a set of parents has the potential to produce 64 trillion different children. So, really, it’s mind-boggling when you realize the odds of any kid coming out looking just like their mom or dad.

Of course, we tend to marvel more over celebrity kid doppelgangers due to the nature of the industry. Because their parents are in the limelight, it’s easier to spot these tiny twins. And it’s admittedly fascinating to watch them grow up and see if they look more and more like their famous parent as time goes on.

Some of these kids are pretty iconic in their own right now (we’re looking at you, Kate Hudson). Others are still little or just starting to make a name for themselves. But here are the lookalike “kids” in Hollywood making us do double-takes.

Yes, it’s true that Blue Ivy constantly gets compared to dad Jay-Z. However, as this side-by-side comparison of young Bey and Blue at the same age goes to show, the Carters’ oldest child actually looks exactly like her global superstar mama.

The next super-supermodel in the making? Maybe! Cindy Crawford’s teenage daughter Kaia Gerber has been hijacking headlines left and right lately for (a) looking just like her iconic mom and (b) strutting her stuff on the runway.

Today is the middle one's birthday, but let’s celebrate the entire Danner-Paltrow-Martin bloodline. Here are three kind, talented, sweet, lithe (rhymes with Blythe!), wonderful women. The apple doesn't fall from the tree—and neither does Apple. Wishing you the absolute bestest year ever @gwynethpaltrow! 💘🎂

When Gwyneth Paltrow’s close friend Derek Blasberg took to Instagram in September to wish the Goop mogul happy birthday, he shared a snapshot including Paltrow’s mom, Blythe Danner, and daughter, Apple Martin. And can we just say wow? The women look like multi-generational carbon copies.

The daughter of Johnny Depp and French model-singer-actress Vanessa Paradis, Lily-Rose Depp was destined to be both beautiful and talented. And she clearly fulfilled that destiny! Not only is she an entertainer like both of her parents, but she could be also her mom’s double.

Tashi, YOU. GIVE. ME. LIFE. How am I so lucky to be your mom? 21 years has gone by in the blink of an eye. I am so proud of the woman you are today, who you have become and continue to evolve into. @natashabure YOU ARE FIERCE. Strong and opinionated, smart and sensitive, silly and kinda funny 😆. You are as gorgeous on the inside as you are on the outside. You are loyal and competitive and unwavering in faithfulness and friendship. You are love. I can’t imagine life without you. You inspire me everyday. You make me want to be a better mother, a better friend, a harder worker and overall better person because I want to be the best example of a woman for YOU. I can’t tell you enough how much I love you, baby. Happy 21st birthday 🎂 💗❤️💗🎂!!!

It won’t be long before you start to wonder how in the world Candace Cameron Bure can be in so many films at once. But it won’t be Candace you’re seeing in all of them — this year, her doppelganger daughter Natasha landed her first starring role in the feature film Faith, Hope & Love. Now, she already has two movies slated to release next year.

Fearless leader, my number one, my heart, my love, my joy, my everything, MY MAMA! Happy happy happy birthday ❤️ @officialgoldiehawn @mr.ryderrobinson

The quintessential mother-daughter lookalikes have to be Goldie Hawn and Kate Hudson, right? Hudson inherited both her mother’s looks and her effervescent personality. (For that matter, Hudson’s son Ryder also seems to have inherited those traits!)

Big Little Date Night 💘 Congrats to every member of #BLL2 crew! So especially proud of my mama and her passion for this story and her work. After seeing just the first episode, I honestly cannot wait to see more! 🌟

When it comes to celebrity parent-child lookalikes, you can’t get much more recognizable than Reese Witherspoon and daughter Ava Phillippe. Adorably, the mother-daughter duo is super-tight, often acting as each other’s plus-one at red-carpet events.

my road dawg for life. happy birthday. #AllDeacon16 #LoveYouMoreThanKhaledLovesAsahd 🧡u🌞

Granted, Ryan Phillippe and ex Reese Witherspoon’s teenage son Deacon looks a lot like his mom. But you can’t deny the resemblance to his dad, too. Any fan of Ryan’s during his Cruel Intentions days understands just how uncanny that resemblance is.

Happy birthday mama. Thank god we chose each other. ❤️

Could Lisa Bonet and daughter Zoe Kravitz be any more stunning? These two are like living, breathing works of art… and there’s two of them. When you throw in the fact that Kravitz’s father is famed rocker Lenny Kravitz and her stepdad is Jason Momoa, it’s almost too much to bear.

Hilariously, Jennifer Garner and Violet — her oldest child with ex-husband Ben Affleck — even make the same facial expressions at the same time. And if it boggles your brain how much they look alike now, you have to check out a throwback photo of young Jenn.

Mark Consuelos and Kelly Ripa’s sons Michael and Joaquin could both double for their actor dad. And, in fact, Michael sort of does since he stars as the younger version of Mark’s character Hiram Lodge on Riverdale. 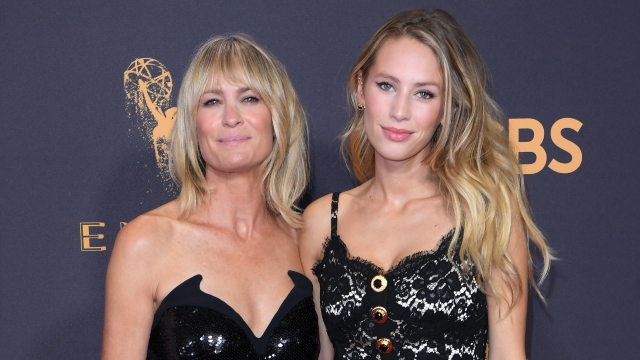 Looking at Sean Penn and Robin Wright’s daughter Dylan Penn is sure to give you a case of déjà vu (like, seriously, is that you Princess Buttercup?!). And you should prepare to do a double-take much more often — based on Dylan’s IMDB, her acting star is on the rise.

Let’s be real: Both of John Legend and Chrissy Teigen’s kids look like their dad. But little bro Miles is for sure the singer’s doppelganger.

Framing every one of these!! Thank you @Vanityfairspain, I adored every moment of shooting with @carys.douglas ❤️

Catherine Zeta-Jones and her teenage daughter Carys Douglas caught a lot of attention in August when they twinned it on the cover of Vanity Fair. In addition to her model good looks, Carys seems to have inherited her mom’s flair for fashion.

Gaia undoubtedly looks familiar because she favors her famous mom so much. But you may also have seen her onscreen — she starred in 2015’s A Walk in the Woods and, in September, BBC American reported that Gaia and Emma had signed up for a female-fronted Peter Pan film called The Lost Girls.

There’s no denying the resemblance between The Longest Ride‘s Scott Eastwood and his iconic actor-director dad Clint Eastwood — especially when you look at photos of Clint around the age Scott is now, like this one.

Before you go, click here to see all the celebrity daughters who look just like their famous moms.