What does it feel like when an Emmy-winning actress gets on stage and urges you to celebrate your success? Joanne Ramos (author of bestseller The Farm) now knows the answer to that question. She had a live chat with Julianna Margulies on owning your success and cutting out self-deprecation, two areas that both impressive women admitted they’ve struggled with at various points. At the end of the day, it took urging from other people in these women’s lives to realize that they really had earned every bit of success that came to them — and that they needed to stop pretending otherwise.

Talking with Ramos on Day 2 of #BlogHer19 Creators Summit, Margulies started to ask her about the pressures of promoting her new book (The Farm is — remarkably — Ramos’s debut novel). “Especially being a woman, we have very different — we’re held up to different standards than men,” Margulies begins. “There was a great line that Michael J. Fox said to my character on The Good Wife: ‘why are women always apologizing? I bumped into you and you just said I’m sorry.’ And there is this natural instinct. So when it comes to self-promotion, was that difficult for you? Did you have an aversion to it?”

As it turns out, Ramos really, really did. “So much of my life I have been self-deprecating,” Ramos explains. “I almost took it as a way to be humble […] I would say, ‘oh the timing was great for it,’ or ‘oh but I really lucked out.'” Especially in the wake of all the praise The Farm was receiving, Ramos found herself constantly deflecting praise — and her family took notice. 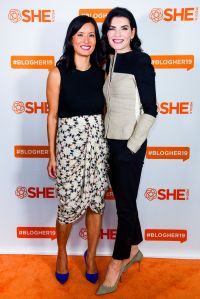 “I was lecturing my daughter on how she never owns all these great things that she does,” Ramos recounts, “and said, ‘Emily, just say thank you!’ And she basically called me out […] she said, ‘you don’t.'” Margulies agrees that becoming a parent has a way of forcing new perspective: “I think the beauty of becoming a parent is ‘monkey see monkey do,'” the actress says. “It becomes much more clear — for me anyway — when I say something to my child, I have to live by that too.”

Ramos had a second lightbulb moment about owning her success — one that calls back Margulies’s shrewd assertion that men and women are treated differently when it comes to professional success. “[My husband] Dave sat me down and said, ‘you realize that if you were a man and if his book were the big deal in the publishing industry,” Ramos shares, “he would be swagging around owning it. And here you are telling everyone it’s because of luck.”

Obviously, women can’t afford to keep downplaying their accomplishments like this: both on a personal level and collectively, we need to know that we are capable of achieving great things, without it being a fluke or a glitch in the system. Luckily, Margulies’ mom had some practical advice on this point: “My mother once said to me, ‘when someone gives you a compliment honey, just say thank you, because that’s the gracious response,'” the ER star told Ramos. “Because the second you start being self-deprecating, the person who just complimented you feels bad. It’s as if we don’t believe them.”

Even if you’re not a parent, you can practice this rule of living by the standards you’d want your loved ones to live by. And that means when someone praises you, you shouldn’t scramble for an excuse or tiptoe around it — you should say “I worked really hard for that,” or even, “I deserved that.” If that sounds too intimidating, start slow: Practice the Margulies family rule and just say “thank you” instead.