Royalty has officially collided in the best way. Beyoncé and Jay-Z broke a royal rule with Meghan Markle and Prince Harry at The Lion King London premiere, and honestly, we would have too. The commanding quartet met prior to a screening of the film over the weekend with the cast, special guests and state dignitaries, including the Duke and Duchess of Sussex.

Apparently, the Grammy-winning duo disrupted a carefully laid out plan by security during the premiere, but it’s not as major as some may think. The “Lemonade” singer and rapper breached royal protocol by arriving after Prince Harry and Meghan Markle, according to a source for Entertainment Tonight. The source also shared that, when musical duo did arrive, they “completely upstaged” the royal couple by earning a greater and rousing round of applause from onlookers who assembled in Leicester Square. 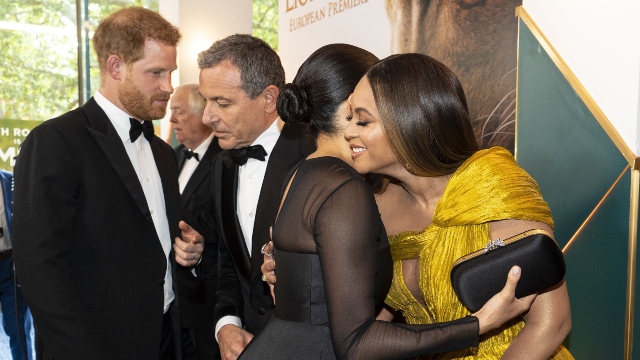 It seems, however, the simple mistake didn’t phase either of the two powerful women. Video and photos have been shared all over the internet of the inspiring women meeting, exchanging candid conversation and showering each other with compliments. When the two first hugged, Beyoncé can be heard referring to the Duchess of Sussex as “my princess.” The “Spirit” songstress even offered her congratulations and compliments on baby Archie, saying he’s “so beautiful.”

The hug also set off a few alarms with many wondering if the embrace also broke protocol. Royals, through history, have been seen as untouchable figures, according to British historian Kate Williams. From medieval times, monarchs were divinely appointed to rule by God, so they were kind of seen as gods, so they demanded to be treated as gods,” she told BBC. Times have most certainly changed when it comes to how the monarchy conducts itself and the procedures it follows. The royal family isn’t seen like gods any more, and Prince Harry and Markle have been very clear they are paving their own path in the monarchy. And if that means the Duchess of Sussex is embracing Beyoncé, we’re all for it.

Upon meeting Prince Harry, Jay-Z offered his own compliments, saying, “Congrats on the birth of your baby.” The new mother’s appearance at The Lion King premiere was her most recent after giving birth to her son. The Duchess of Sussex was also recently seen at Wimbledon, appearing at two matches to support her friend, tennis champion Serena Williams. While the breach in royal protocol may have deterred security plans, it didn’t seem to phase the royal couple or the Grammy winners in the slightest.