The royal family had a shock last night when a man intruded Buckingham Palace while Queen Elizabeth was sleeping. The scare happened at 2 a.m. on Wednesday, July 10, when a 22-year-old man scaled the front gates of Buckingham Palace and was loose on the grounds until he was arrested by the Queen’s Royalty and Specialist Protection Command officers, according to The Sun.

Related story Prince Harry, Meghan Markle, & Their Children Might Make One More Trip to the UK This Summer

The details sound pretty darn scary. A source told The Sun that the Queen was sleeping in her bedroom at the time of the intrusion. Fortunately, the intruder never made it inside the palace, but the source notes that he was “banging” on the doors to be let in. “There was an intruder at the Palace while the Queen lay sleeping in her bedroom and he was on the loose before the cops arrested him,” the source said. “He was determined to get inside the palace and was banging down the doors but, thank goodness, everything was locked up.”

Buckingham Palace confirmed to The Sun that the Queen was notified of the intruder after his arrest. The palace also explained that the intruder may have known that the Queen was in her bedroom at the time of the incident because the Royal Standard flag was flying, which notifies the public of when the Queen is home. A police spokesperson also told The Sun that the man, who was not armed, is in the custody of the central London police for the suspicion of trespassing. The police also noted that incident isn’t being investigated as terrorism. 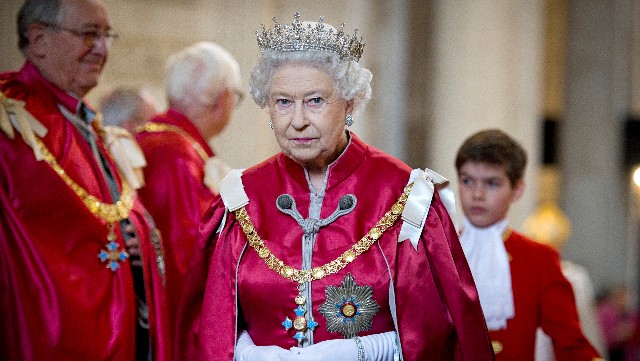 This isn’t the first time an intruder has broke into Buckingham Palace while Queen Elizabeth was home either. In 1982, a man intruded twice on two separate occasions, according to the Washington Post. On his second break-in, the intruder made it to the Queen’s bedroom. The Queen eventually woke up when the intruder moved the curtains.

Though not as scary as the last invasion, this week’s intrusion still sounds startling as heck. We’re glad the Queen is OK, and we hope she ups her security because, come on, the Queen needs to be protected.