Welp, it’s been less than a week since Stranger Things season 3 dropped, and you know what that means — most of the fandom has already blown through every episode and is anxiously awaiting news on the next installment. Fortunately, the Duffer brothers have teased Stranger Things season 4. They aren’t confirming anything yet, but the likelihood that fans will once again visit Hawkins, Indiana and check in on Eleven and the gang seems high based on their recent comments.

Although season 3 started off a bit slow, the final few episodes proved pretty explosive — literally and figuratively (more on that in a minute). So, if Stranger Things does score a fourth season, where do creators Ross and Matt Duffer go from here? “We don’t want to write ourselves in a corner, so we try to have these early discussions with the writers just to make sure that we’re setting ourselves up to go in the right direction,” Ross told Entertainment Weekly. “We don’t know a lot, but we do know a lot of the big broad strokes.”

Coming into season 3, the brothers knew certain key plot vehicles — think Billy’s fate and the introduction (or return) of the Russians. “That’s sort of where we are in season four,” continued Ross, “We have the big broad strokes. It’s just now about filling in those lines in the details.”

Of course, it goes without saying that the guys probably have a pretty solid grasp on how they hope to fill in those lines. They just can’t give away too much yet, considering that season 4 hasn’t even been confirmed by Netflix. Still, the Duffers seem hopeful. “We’re pretty excited about where it’s potentially going to go. Again, like we said, it’s going to feel very different than this season. But I think that’s the right thing to do and I think it’ll be exciting,” said Ross. Warning: Stranger Things season 3 spoilers ahead.

Fans are surely just as excited, if not more so, after watching season 3’s conclusion. Some storylines certainly seemed to come to a logical end (#RIP, Billy). However, the final few moments of the season 3 finale suggested that there is more Stranger Things story to tell. “Certainly season three ends with several plot strands that are separate from each other,” echoed executive producer Shawn Levy. “And should there be a season 4, I think we’ll see them all explored.”

This could mean a lot of different things. Starting with the obvious, fans will find out what became of everyone’s beloved curmudgeonly sheriff, Hopper. Which, praise be, since we’re honestly still not over the scene of Elle reading his letter. There’s also the matter of Elle’s mysterious missing powers. And will we finally meet Dustin’s girlfriend IRL? How about Steve and Robin — do they get girlfriends via their new video store clerk jobs? 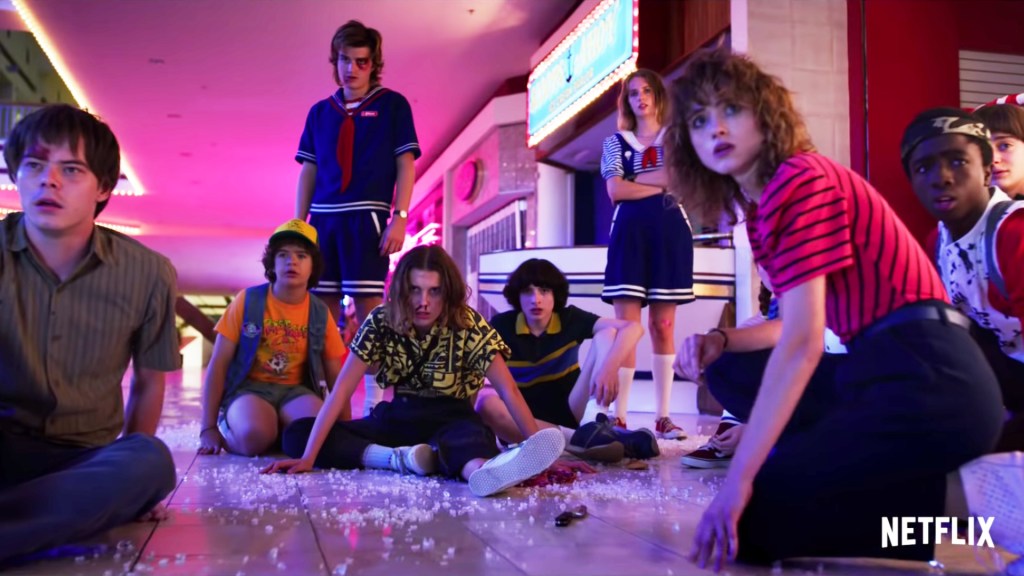 It’s sort of assumed that some of season 4 would take place outside of Hawkins, considering the Byers family just moved out of the town with Eleven in tow. But the season could also include a little international travel. Per Ross, who the American imprisoned by the Russians is and what they’re doing with the Demogorgon will “play a huge role in a potential season four.” Added Matt, “I think the biggest thing that’s going to happen is it’s going to open up a little bit, not necessarily in terms of scale, in terms of special effects, but open up in terms of allowing plotlines into areas outside of Hawkins.”

All right, Netflix… you’re up. Can we confirm next season is going to happen? Because it already sounds amazing.