On Thursday, the Duchess of Sussex attended day four of Wimbledon to support good friend Serena Williams. Her presence caused a stir (of course), but for an exceedingly silly reason. Critics are accusing Meghan Markle of violating the Wimbledon dress code with her casual denim look — but given where Meghan was sitting, there was actually no dress code for her to violate.

Typically, Meghan would have sat in the Royal Box at Wimbledon. Per the Wimbledon website, the rules for attendees’ attire is as follows: “dress is smart, suits/jacket and tie, etc. Ladies are asked not to wear hats, as they tend to obscure the vision of those seated behind them.” Williams’s match, however, took place on court one; the Royal Box is on centre court. And only the Royal Box has a dress code for Wimbledon: All other guests can dress as casually as they like.

Meghan’s look was indeed casual by a royal standards, but nonetheless put-together and chic. She paired dark blue jeans with a striped white blazer, a black tee and a Panama-style hat (another perk of sitting outside the Royal Box). What people should be focusing on is how happy and stunning Meghan looked just a few weeks out from her maternity leave — not whether her pants are in keeping with what’s expected from a Duchess at a tennis match. 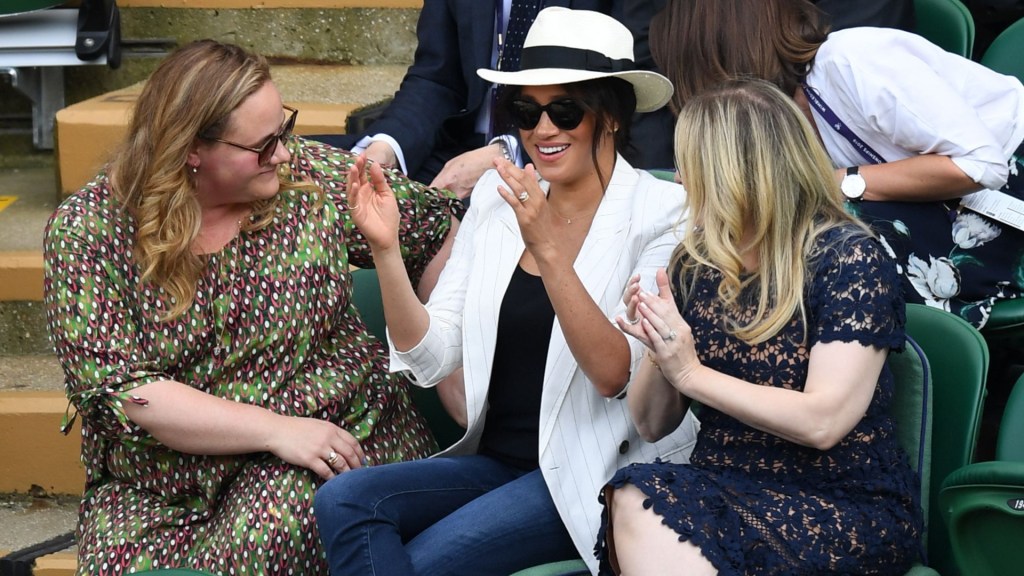 Onlookers criticizing Meghan’s look seem to have misunderstood the Duchess’s seating, calling her out for violating Royal Box dress code specifically. “So, gentleman have to wear jackets and ties in the royal box and Meghan rocks up in jeans. What’s that all about???” one wrote. “Sorry for the post but I have to ask why Meghan Markle was allowed into the royal box in “JEANS” when other people have been refused just for not wearing a tie????” another added

Meghan attended the match with two friends from university, Lyndsay Roth and Genevieve Hillis. Her Wimbledon look was completed with a new necklace bearing the letter “A,” which some believe is a tribute to baby Archie. All around, it looks like Meghan had a fantastic time at the match, and a well-deserved relaxing afternoon. We believe women should never be criticized for their choice of attire — but new moms especially. And frankly, Meghan is nailing this look.