Warning: This article contains spoilers for Handmaid’s Tale Season 3. We (sadly) haven’t seen much of Max Minghella’s Nick on season 3 of The Handmaid’s Tale: last we saw him, the Commanders had just ordered him to the front lines of war. Now, a fan theory predicts Nick will join the rebels once he’s out of Gilead — and honestly, we can totally see it happening. We know that Nick was sent to Chicago, where June believes he will be killed. And we know that Nick has plenty of reason to rail against Gilead, after all he’s gone through with June and his child bride Eden. But Nick has also struggled to fully throw off the shackles of Gilead in the past — perhaps up to and including his recent chumminess with the Commanders. Here’s why the good people of Reddit think he’ll find his way to the light.

Related story Sign Up for Hulu for Just $1 per Month for the First 3 Months — But Hurry, This Deal Won’t Last Long

First off, we know that Nick has been sent to Chicago, an area frequently referenced as one of the biggest battles in which Gilead is currently engaged. When Nick tells June where he’s going, she responds flatly and without hesitation: “You’ll be killed.” We also know that protests are occurring about what’s happening in Chicago: In fact, that’s where we first catch a glimpse of Luke and baby Nichole, surrounded by marchers chanting: “We stand with Chicago.” Also in season 3, Gilead also receives a “shipment of females” from Chicago (ew), and the rebel Marthas try to send a member of their team to a cell “out West.” As Refinery29 points out, we have no idea how many of these rebel cells might exist — but what we do know is that the Gilead army is facing a seriously daunting enemy in Chicago. 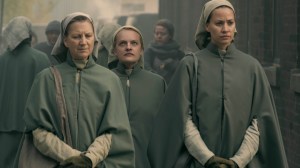 The theory that Nick will join rebel forces after his deployment to Chicago (courtesy of Reddit user Kspence92) goes like this: “from the maps we know that American forces are standing their ground against the Guardians all along the West Coast, plus Texas and Florida. Could Nick be captured and perhaps defect to the US army and/or Mayday/Anti Gilead militia ?” Other commenters agree that they’ve considered this storyline, with one adding that Nick may seek the rebels out of his own volition. “Or not being captured but seeking them out,” Reddit user oceaniadx writes. “I’m excited to see what the rebel areas are like. Hopefully we will.”

Another Reddit user, TiredHungryAndMad, references the extended trailer for next week’s episode, which includes the line “I don’t think you know who Mr. Blaine is.” The post goes on to ask: “Who is Nick Blaine? What don’t we know about him?” In response, Reddit user kanjilal_s suggests that Nick might be an “Undercover agent like CIA,” possibly an American agent there to “bring down Gilead.” Reddit user NothappyJane adds: “I think he’s a spy for other countries/resistance.” Other commenters are less sure; given how long he’s been with the Waterfords, they think it could be more likely that he’s been with pro-Gilead forces all along.

Either way, something big will clearly be revealed about Nick next week: And personally, we’re hoping it turns out he’s a good guy (AKA one of the rebels). Then again, in Gilead, you really can never know.