In recent weeks, rumors have flown that the Duchess of Cambridge is feuding with her sister-in-law, Meghan Markle. If true, it wouldn’t be the first time the Duchess is feuding with one of Prince Harry’s partners. A royal biography claims that Kate Middleton almost befriended Prince Harry’s ex Chelsy Davy, but was ultimately unsuccessful. Kate had started dating Prince William a year before Harry and Davy got together, starting an off-and-on relationship until their wedding in 2011. Apparently, Kate tried to approach Davy multiple times to bond and strengthen their friendship, but Davy showed a limited interest in return.

Harry first met Davy in 2004 at a British boarding school. Davy was born and raised in Zimbabwe to wealthy parent  and briefly held a job at a law firm. For a long time, rumors flew that Davy would become Harry’s wife. But the pair ultimately split, with Davy announcing the breakup on Facebook and citing differing life choices as the reason.

According to royal biographer Katie Nicholl, there were two main issues in the relationship between Kate and Davy: Their differing personalities and Davy’s resistance to Kate reaching out. Overall, Nicholl describes Kate’s “friendship” with Davy as “lukewarm,” adding that “they were completely different characters and the bubbly Zimbabwean got along better with Pippa.” 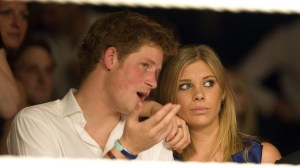 Nicholl says that Kate made repeated attempts to get close to Davy, including “inviting her clothes shopping” — but Davy, uninterested, “had turned the offer down, leading to a coolness between them.” Apparently, things didn’t improve between the two until the wedding of Peter Phillip and Autumn Kelly in 2008. Per Nicholl, Kate was “grateful” that Harry and Davy had been invited, as “she didn’t know many of the guests.” It was also Kate’s (and Davy’s) first time meeting the Queen, so “they were both nervous” and able to bond over the experience.

Harry and Davy split just a few years later, but Davy has remained close to the royal family, attending both William and Kate and Harry and Meghan’s weddings. As we now see the media accusing Kate and Meghan of having a tense relationship, it’s interesting to see how Kate’s friendship with Harry’s past girlfriends has been cast. In the end, Kate and Davy may not have been best friends, but there’s nothing to suggest real animosity. Being a royal is tough enough: Let’s not also condemn Kate for not instantly bonding with every woman she meets.