One of the wonderful things about television is that we can play out scenarios we know, logically, could never come to pass in real life. This is true of many aspects of Big Little Lies: The wealth and luxury of the Monterey community provide one layer of vicarious fantasy; and the Monterey Five’s act of vigilante justice in killing Perry Wright (Alexander Skarsgård) another. By the time season 1 drew to a close, we had witnessed Perry’s abuse of wife Celeste (Nicole Kidman) enough to cheer whole-heartedly when Bonnie (Zoë Kravitz) accidentally pushed Perry to his death. Not to mention how compelling it is to imagine these five women — only three of whom don’t openly despise one another — coming together to save Celeste from further harm at the hands of her husband.

But this is where fantasy ends and reality begins. In a fantasy world, we can support guilt-free the notion that — with a single push — Celeste’s abusive husband is wiped from the world, and the people responsible for it walk free. Her life can change in an instant, and, because Perry was a bad person, we don’t have to care about justice for his killers. We only have to keep rooting for who we were rooting for all along, treating Perry’s death as no more relevant of a plot point than if he had moved out of town or fled in the night. Perry’s death, within the confines of fiction, is a resolution to Celeste’s problems — and Bonnie’s push is a saving grace.

In real life, it’s neither so simple nor so pleasant. And to Big Little Lies’ credit, it doesn’t appear they’re taking the easy way out in season 2. With the introduction of Mary Louise Wright (Meryl Streep), Perry’s grieving mother, we see the town of Monterey squarely confronted with the lives of those whose problems weren’t solved when Perry was pushed to his death. In the season 2 trailer, Bonnie far from putting the incident behind her. Plagued with flashbacks and fighting the urge to confess, we see Bonnie (literally) trying to outrun her past. And frankly, it would be wrong for Big Little Lies season 2 to have her succeed.

I don’t say this to downplay Perry as an abuser or negate the very real danger Celeste was in at the moment Bonnie intervened. Per the National Coalition Against Domestic Violence, the moment a victim tries to leave a domestic violence situation is the moment they’re most in danger. In fact, a 2000 study looking specifically at men who had killed their wives found that either “threats of separation by their partner or actual separations” were the most common precipitating event leading up to the murder itself. At the moment of Perry and Celeste’s final confrontation, he had uncovered just how far along Celeste was in leaving him, down to the apartment she’d rented for herself. Even if Perry hadn’t been about to kill her in that moment, there’s no telling how he would have acted in private. Bonnie — and the rest of the Monterey Five — were well within their rights to get Celeste as far away from him as possible and ensure he couldn’t touch her again.

But how can we say, with equal conviction, that Bonnie was within her rights to kill Perry? Further, to kill Perry and paint it as an accident, leaving his mother and children behind with unsatisfying half-details of a fictional fall. We can’t say that Bonnie made a decision to end Perry’s life in that moment. But the ensuing cover-up was certainly a conscious decision, enacted by each and every member of the Monterey Five. They tell a lie about a man’s death that leaves everyone involved worse off than they were before — and the lie should absolutely be exposed before season 2 comes to a close.

By pretending Perry’s death was an accident, Celeste remains frozen in the lie of a perfect marriage she was forced to tell while Perry was alive. She can’t come forward now about the true nature of their relationship without making herself a suspect. And so instead, just when she was making progress with a therapist on seeing her dynamic with Perry for what it was, Celeste is left to play the grieving widow of a loving husband for the town of Monterey and for her mother-in-law, who expects Celeste to fully share in her grief. 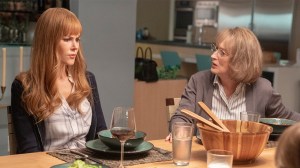 Bonnie and the others are harmed by this lie too. Having been the one to deal the final blow, Bonnie’s reaction is the most overt, but each of the Monterey Five will suffer in her own way for adding another layer of secrecy to personal relationships already fraught with lies. Can Madeline’s marriage, reeling from her recent affair and (possibly) unresolved feelings for her ex-husband, really survive a secret of this magnitude? Can Jane, having only realized Perry’s identity as the man who raped her seconds before his death, bear the weight of keeping such a secret from her son? (Keep in mind that Jane, too, can’t speak openly about who Perry was without earning suspicion.) Renata, I suppose, has the best chance at emerging unscathed, but given how tenuous and recent her relationship with these women is, won’t the psychological weight of the secret feel all the heavier knowing Renata has the power to out them at any moment?

The point is this: Maybe what Bonnie did had to be done. Maybe he was on the verge of killing Celeste, and it was the only thing that would have saved her. That matters less than the fact that Bonnie did not intend to kill him either way — and to punish her as a willful murderer would be a far cry from justice. But the best hope for the Monterey Five, and everyone they love, is not to keep this secret and try to get away with it. Whether from guilt, from the psychological toll of secrecy or from the need to process complicated feelings of grief, the weight of Bonnie’s action will forever freeze these women at the moment it was committed.

Only by coming clean do the Monterey Five have a chance at moving on and finding peace. And while the idea of walking away from a righteous murder without a trace is a compelling fantasy, Big Little Lies is too smart a show to pretend that that could happen — or at least, I sincerely hope it will be.