As the last-ever episode of Game of Thrones draws near, it’s time to reflect back on the series as a whole. Not for the purpose of tearing apart season 8 — there are plenty of people taking that on already. Instead, we’re taking a look back at the biggest changes to the GoT cast’s appearance. Given that the HBO show’s pilot was filmed a full decade ago, the cast has certainly gone through some changes (especially the actors who started the show as children). For the characters who have survived all the way to season 8, we’ve rounded up a side-by-side examination of their season 1 to present day looks. 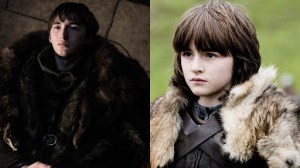 Arguably, the character of Bran Stark has had the biggest transformation of all: namely, that he’s given up his old identity and assumed the role of the Three-Eyed Raven. Looking at actor Isaac Hempstead-Wright, who started the show at age 12, there’s been a significant difference in his appearance, too. It’s hard to believe that the actor on the right played someone who was pushed out a window after witnessing incest, but hey, that’s Game of Thrones for you. 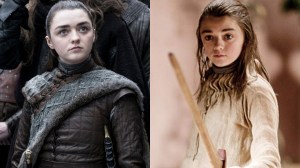 Maisie Williams joined the GoT cast when she was only 14 years old, so it’s no wonder that she has one of the biggest transformations on the show. In season 8, Arya has proven herself as a fully matured woman (in more ways than one) and she has the glow-up to prove it. Of course, 22-year-old Williams is still quite young, but there’s a seriousness to season 8 Arya that wasn’t there before. 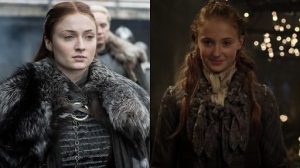 Sophie Turner was cast in the role of Sansa Stark at age 15. Season 1 Sansa couldn’t be more different from Sansa now: she was boy-crazy, slightly self-obsessed, and wholly uninterested in others’ political machinations. As Sansa grew up, she became one of the shrewdest, most self-possessed people in Seven Kingdoms, and her changing look has reflected that shift. 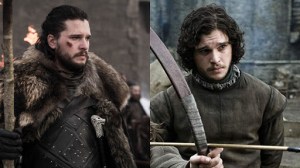 As you can tell, Jon Snow (aka Kit Harington) hasn’t gotten much of a makeover as seasons went on (facial hair notwithstanding). For someone who died and came back to life over the course of those eight years, we would have expected slightly more of a physical change — like, even a single wrinkle would do. Maybe not aging is another one of Jon Snow’s secret Targaryen powers, or maybe Harington just has a really good skincare routine. We’ll never know. 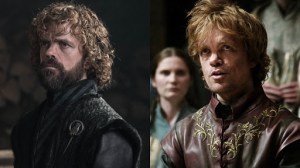 Peter Dinklage was the first person to be cast in Game of Thrones, at the age of 41. Over the years, he’s adopted a thick beard (maybe he saw Jon’s and liked it?) and seems to have grown out his golden Lannister coif into slightly longer dirty-blond curls. We’d love to think that the hair change was a purposeful choice to distance himself from his Lannister siblings (and honestly, if anyone could find a good colorist in Westeros, it’s Tyrion). But more likely, his hair has darkened because he spent so much time away from the sun-soaked terrain of King’s Landing after joining Team Dany. 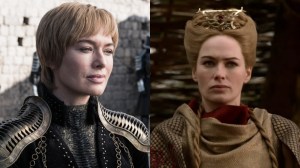 Lena Headey’s makeover has a sad tinge to it, given that it was foisted upon her by the High Sparrow as part of her “walk of atonement.” Cersei’s sleek pixie cut of later seasons is in stark contrast with her earlier flowing golden locks. That hair was simply iconic (remember when Sansa started copying it in season 1?) but Cersei’s later look acts a powerful reminder of what she’s been through — and all that she’s had taken away. 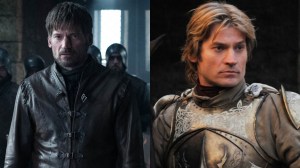 Jaime Lannister, brought brilliantly to life by Nikolaj Coster-Waldau, met a similar fate as the other two Lannister siblings — when it comes to his hair, that is. None of the Lannisters make it to season 8 with their brilliant golden hair of season 1, and Jaime’s muted tones and full beard in season 8 closely mimic Tyrion’s transformation. This may be reading into what we know of his character too much, but it feels like there are subtle changes to Jaime’s face in season 8 too — or maybe it’s just that he’s no longer sporting a permanent smirk. 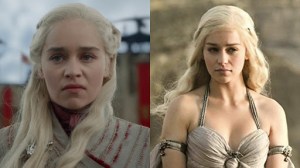 Oh, Daenerys. If we could take back anyone’s transformation, it would be yours. (Just this last week, that is.) Actually, before Dany went Mad Queen, she had one of the best transformations on the show: she started in a helpless position, and grew to be the strongest contender for the Iron Throne, beloved by many. (Again, all before last week. Why, Dany, why?!) As pictured above, Dany’s youthful glow has been replaced by a somewhat more world-weary expression — and earlier flowing gowns traded out for battle-appropriate clothing. She’s still stunningly beautiful, of course, but not quite the bright-eyed ingenue of seasons past.