My Brilliant Friend is, to put it simply, the one show women everywhere need to see right now, at this point in 2018. The HBO miniseries is based on enigmatic Italian author Elena Ferrante’s Neapolitan novels, and the first part of an intended four-part adaptation follows two best friends as they come of age in Naples, beginning in the 1950s. The books, which were wildly popular in Italy and sold 10 million copies worldwide, center on the friendships and relationships between women, the changing role of women in recent history, how women are often pitted against each other just to survive and what they must do to overcome it.

More: You Should Be Pumped for My Brilliant Friend Even If You Haven’t Read the Books

At the center of the story are Elena and Lila, two young girls drawn together by unfortunate circumstances but finding solace and strength in their friendship. Both girls live in poverty and violence of various kinds, but they are intelligent, capable young women determined to thrive. While the central plot of the story follows the two girls and their journeys in the ensuing years, in the background we get a look at stories that blend together class structure, politics, crime, infidelity and murder.

The story is narrated by Elena, who embodies the kind of wide-eyed, open, curious young female protagonist that we know and love from so many other classic stories like Anne from Anne of Green Gables or Jo March from Little Women — and Elena and Lila read Little Women together until they have it memorized.

When Elena meets Lila, she’s smaller and made to feel different from the other children, despite that she’s clearly one of the smartest in the class. Lila not only knows how to read and write before all of the other children (because she taught herself), she also fearlessly talks back to the teacher and stands up to older boys. Lila gives Elena the strength to fight for what she wants, to explore the world, and to be heard — but at the same time, a darker side of the mysterious girl emerges that complicates their friendship. 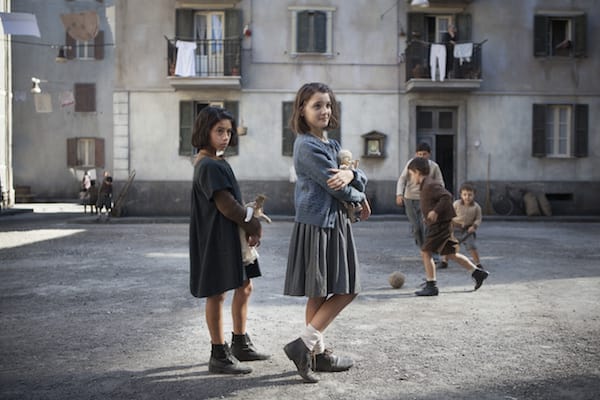 While the backdrop to the story — as well as the time frame and language — stand in stark contrast to our modern lives, the themes and messages of the story are timely and culturally relevant, not only emotionally affecting the viewer but also making a strong statement about how far feminism has come in 50 years (and how far it has to go).

This is centrally a story about women: not just the central pair of Elena and Lila, but also their classmates, mothers, teachers and neighbors. The series is more than on track to pass the Bechdel Test as it navigates important issues that are still affecting women today: equal rights, education, violence against women, emotional labor. Even the #MeToo movement gets nods in these early episodes, despite My Brilliant Friend being set in the 1950s, as we see how the men in the neighborhood use their power for sex.

Yet the series isn’t preachy and doesn’t take an overly simplistic view of feminism or female relationships. Instead, it tells a realistic story (which is more than a little autobiographical) of women’s complex relationships. It feels as if the truth of the story is simply the truth of women’s place in the world, both in the 1950s and today. The journey of two very different women, through their teenage years and adulthood, also just happens to tell the story of the journey of all women.

More: 11 TV Shows That Will Give You Insane Wanderlust

In My Brilliant Friend, women have a prestige TV show that is focused fully — and beautifully — on the issues that have been affecting women worldwide for too long. It’s a show about the interior lives of women and the uniquely female struggle to be seen and heard. It might be set in another time and place, but make no mistake: My Brilliant Friend is a show that women everywhere need to see and hear right now.