Priyanka Chopra and Nick Jonas are one of Hollywood’s most exciting couples right now. The pair first caught our attention as a couple in May, and before we knew it, they had officially confirmed their engagement in August (although rumors circulated in July that Jonas had proposed). Now, with only two months left before their wedding day in December, Chopra and Jonas have officially begun coordinating some key pre-wedding events, like Chopra’s celebrity-filled bridal shower that happened over the weekend.

More: All the Celebrity Couples Who Recently Said I Do

According to Cosmopolitan, the party — hosted by bridesmaids Mubina Rattonsey and Anjula Acharia — was held at Tiffany’s Blue Box Café in New York City. And while photos from the event are limited (it appears there was a strict no-picture or no-social media policy), the women’s fashion magazine has reported it was a star-studded affair, with attendees including Kelly Ripa, Lupita Nyong’o and Danielle Jonas.

As for the guest of honor, Chopra was seen entering the shower in a stunning strapless white gown. 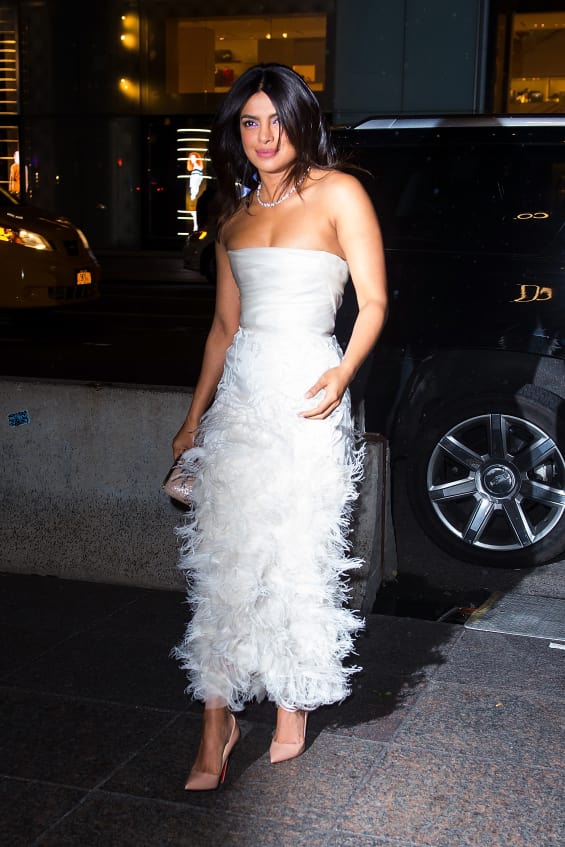 Chopra’s stylist, Mimi Cuttrell, also posted a photo of the star’s shower on Instagram. In it, Chopra could be seen posing next to a series of silver balloons that spelled out “Bride.”

THE brighter version for everyone. @priyankachopra #styledbymimicuttrell (sorry I was too exited when I posted the first pic)

The photos of Chopra from her special night out only have us even more curious about what it looked like at the actual party, which leaves us a little deflated over the fact that more celebs in attendance haven’t posted photos on social media of their night out (come on, Ripa, you love to Instagram!). But even with just a few photos of Chopra looking stunning, this bridal shower is just the first in a series of big events for Chopra and Jonas, which means it can only get more glam from here on out, and if that’s the case, we can’t wait to see photos from the next event.