There are plenty of reasons to love Mark Consuelos, especially if you've watched his career grow since his early days on All My Children. As if it wasn't enough to be a fan for his work in film and television — or the fact that he and his wife, Kelly Ripa, are #CoupleGoals — we have a new reason for you to join Consuelos' fan club: He's currently one of the many male celebrities teaming with the HeForShe campaign, which aims to eradicate gender inequality in all areas of our lives.

In late September, SheKnows got the chance to catch up with Consuelos about his work with HeForShe. We learned just how important the issue of gender equality was to Consuelos and how he and Ripa are passing on this deeply felt importance to their three children, Michael, 21, Lola, 17, and Joaquin, 15.

SheKnows: Can you tell us how you got involved with HeForShe?

Mark Consuelos: It came across my desk and, since I'm shooting in Vancouver right now [for Riverdale], it seemed a little impossible. But I read about the campaign, I did my research about it and then I thought about it. I think [this issue, gender equality] is super important. I think especially now, it's absolutely important. I think it's important to be the agents of change: to help, to serve, to assist. That, I think, is essential for gender equality.

SK: What are the primary gender inequalities in the entertainment industry, like fixing the pay gap or leveling the playing field when it comes to available opportunities for all, that you want to focus on fixing?

MC: Not that there's a magic wand to fix it all, but things like the pay gap or opening doors as you mention are really important. I think that one [about opening doors] was the one that really resonated with me.

We have a daughter who's a senior this year, and I just see her with her classmates every year and half the population of the classes is female and half the population is male. I know how hard she works and I know what she does in school, and the idea that graduating from high school, going to college and graduating from college with the same type of work ethic [as her male peers] — and yet I worry about the lack of opportunity or the possibility of her wage gap because she's a woman.

That big disparity in pay because she's a woman is absolutely unconscionable; it's unacceptable. So, I think that [with things like closing the pay gap,] employment and power comes decisions. I think that that would be a good first step, especially in our society here in America.

SK: Have you had to talk about these issues around gender inequality yet with your kids?

MC: My daughter has an amazing role model in her mother. She has someone that's intelligent, that's dynamic, outspoken, who has integrity, that sticks to her word, that [in our family] it's just not acceptable that there would be some gender inequality. So, for her, I think it's just a general way of life that she expects that things — that's how she is going to comport herself, that's her viewpoint.

My sons as well, seeing a strong female representation in their mother, I think, has been the biggest lesson. You can talk about this all you want, you can generalize it. But, in my family, when men refer to their wives as their better half, in my case, I actually mean it.

SK: Speaking of women in your life, we're curious: Can you recall a specific moment when you saw your wife, Kelly Ripa, have to fight on these issues?

MC: I could name a hundred times. She's been in this profession for close to 29 years. So, yes, I mean, that's called Tuesday and Thursday for us [laughs]. 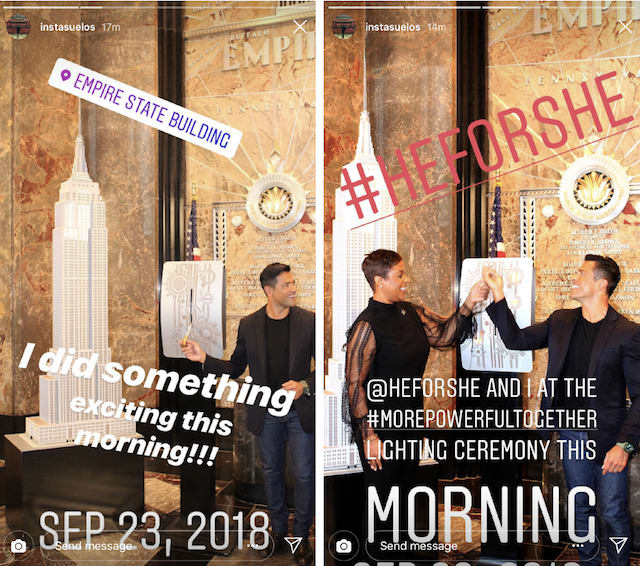 SK: You’ll be working more closely with your wife behind the scenes on How the Other Half Hamptons. Can you tell me what it’s like working with her as coproducers?

SK: Your oldest son, Michael, will soon be seen on your TV show, Riverdale, and he'll be playing a younger version of your character, Hiram Lodge. Can you tell us what that casting process was like from your point of view?

MC: Oh my gosh, that was so great. It was kind of a fluke. [Riverdale season three] will have a flashback episode, and Roberto [Aguirre-Sacasa, Riverdale's creator and producer] was saying to me, "Listen, we'd love to have Michael [audition] to play Hiram as a young wrestler." And they loved it.

So he [auditioned], got the job and it was such a thrill for us as a family to be able to share that. We also hung out together while we were shooting, and I even went to work one day not so much to watch him but to support him while he worked. It was definitely a bucket list moment for me to have my son on a job with me; it was a thrill for us.

To find out more about the HeForShe campaign, head over to heforshe.org.