It’s not every day you get to hop on the phone with an Oscar-winning actor and talk about the importance of one of the Boys & Girls Clubs of America, which help millions of kids of all ages develop the fundamental skills they need to lead successful lives. Just a few weeks ago, SheKnows spoke with Denzel Washington about exactly this topic — along with the breakout year his son, actor John David Washington, is having and what’s next in his career. Denzel has been involved with the Boys & Girls Clubs for a majority of his life, and he continues to work with and support the organization.

When we spoke, Washington’s support came in the form of supporting Malachi Haynes, the winner of the National Youth of the Year Award for 2018-2019, who also joined our chat to discuss what it felt like to win an award for his contributions to the Boys & Girls Clubs. In speaking with both men, it became clear they wanted to impress upon us the importance of getting involved and active in the community.

SheKnows: Denzel, can you tell me how you got involved with the Boys & Girls Clubs of America originally and why you chose to stay involved?

Denzel Washington: I wanted to join the club from the age of 5. They were building a [Boys & Girls] club in my town and I always just wanted to go there. I wondered what went on there. Now, I’ve spent 50-some-odd years as a member, as a counselor and as a spokesperson. So, it’s always been a bright light in my life and at a positive place, as they say, for young people. I owe a tremendous amount to the Boys & Girls Club for guiding me and helping me to become the man that I am. 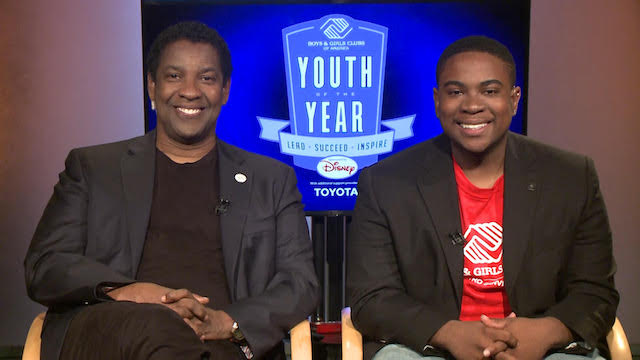 SheKnows: From your experiences with Boys & Girls Clubs, can you tell me what you’d recommend to others who want to get involved in charitable giving?

DW: I think that’s a good question for Malachi. Malachi, what do you suggest they do?

SheKnows: Malachi, can you tell me a little bit more about the process you’ve been through, leading up to your competition win?

MH: Yeah, I can’t quite put into words right now. I’m just feeling kind of surreal right now. [The night I won] I had all kinds of emotions running through my head, but right now it kind of feels nice to know that hard work does pay off.

The 2018-2019 Youth of the Year is Malachi H. of @BGCMetroDenver! Be The Change. Own The Future. In the comments, drop a 🏆 to congratulate Malachi! #NYOY18

SheKnows: Denzel, your son, John David Washington, is having a breakout year as an actor. Has he come to you with any advice on how to navigate the world of acting and being a celebrity?

DW: Well, we’ve talked [about acting] all of his life and anything he would ask, I tried to give him an honest answer. I’m very proud of him, as is my wife [actor Pauletta Washington], and I think he’s well on his way.

More: Regina King Supports Women in the Arts & Believes You Should Too

SheKnows: Denzel, can you give us a little preview of what you’re working on at the moment?

DW: Unemployment [laughs]. I recently did a run in five-hour play in the spring, The Iceman Cometh, which was a real workout. I look forward to my next project, but right now I’m enjoying unemployment.

Click here to learn more about the Boys & Girls Clubs of America’s Youth of the Year program and all of this year’s finalists.