Variety asked Gyllenhaal to write an essay about Reynolds and why he “represents a new generation of movers and shakers that capture the best of Manhattan.” Well, Gyllenhaal definitely rose to the occasion.

He began his essay, which was published on Tuesday, by writing: “I first met Ryan many years ago, and he struck me immediately as quick and warm and thoughtful, a gentleman in an era of foppish putzes, the unlikely love child of Mel Brooks and Dorothy Parker and Gary Cooper. He was also taller than me. Against my wishes, we became close friends.”

More: Ryan Reynolds’ New Project May Be the Best Idea Ever

Gyllenhaal’s jokes continued as he called out Reynolds’ “work in a string of romantic comedies,” referring to Reynolds work in rom-coms like Definitely, Maybe and The Proposal.

“He was undoubtedly charming and handsome (annoying), but he never quite had the space to fire on all cylinders,” Gyllenhaal wrote, before hilariously adding, “After years of waiting and struggling to fit his unfortunate, pear-shaped physique into the skinny jeans of a conventional romantic lead, Ryan made his own luck with Deadpool.” 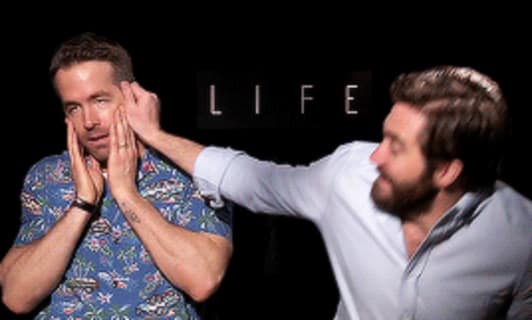 Gyllenhaal then got serious and praised Reynolds’ role as Deadpool and how major a talent he truly is in addition to how hard he worked to ensure the films became a success. He also wrote: “But make no mistake about it: For all of the effortlessness that Ryan projects, the man works tirelessly. He writes all night so he can be present for his kids and wife all day (and thanks to Aviation gin, he can pull off the latter).”

This isn’t the first time Gyllenhaal’s gushed about Reynolds. During a March 2017 interview with BBC’s The One Show, he said, “He’s a wonderful man. It’s rare in our industry to meet someone, a contemporary, and there’s no competition … There are just some friends you meet at a certain time in your life.”

More: Jake Gyllenhaal Got Shifty When Questioned About T-Swifty

Reynolds feels the same way about Gyllenhaal. While chatting with Good Morning America last March, he said, “Jake is easily the most interesting actor working in Hollywood today. Definitely one of my favorites, and then at the same time one of the kindest guys I’ve ever met.”

If that isn’t enough to make you swoon, Gyllenhaal ended his essay by admitting that Reynolds is a good writer and comedian but said, “[H]e is a better friend and father and husband,” which is his “true mark of power.” These two really do have a beautiful bromance.