The show pretaped this summer, and I got a behind-the-scenes look at the show by attending multiple tapings as an audience member. I know you’ve been so curious about what to expect from this upcoming spinoff, and while I wasn’t able to reveal the details until now, I’m so ready to share them with you. What you’re going to read is what I observed during the taping, both onstage and off.

More: The Cast of Dancing with the Stars Season 27 Has Been Revealed

Juniors take the best elements of DWTS and give it a fresh twist. If you think DWTS is emotional, just wait until you see these young talents dance. Juniors will air as a companion show to the veteran dance competition show, with Juniors airing on Sundays and the original DWTS continuing in its Monday night slot. Juniors is so good, though, I think it might eclipse DWTS in popularity.

Here is the inside scoop on season one.

Let’s be honest: This series has a better cast than season 27 of DWTS. There are a lot of contestants you will fall in love with, like spelling bee expert Akash Vukoti, professional skateboarder Sky Brown and Avengers actor Ariana Greenblatt. If you’re hesitant because you saw Alana “Honey Boo Boo” Thompson on the list, you are going to see a new side to her — she’s a confident and spirited teen. This cast is adorable!

The pros are here to help out

https://www.youtube.com/watch?v=d0A-uTxFlPwWhile many DWTS fans will tune in to see their favorite pros mentor the young dancers, it’s the kid pros who steal the show. The talent is unbelievable, but that’s not a surprise if you have followed shows like America’s Got Talent, So You Think You Can Dance: The Next Generation and Little Big Shots, because many of these kids are veterans of the shows. You will be blown away by all the talent.

The stage is so cool

The ballroom will look different for Juniors than it does for DWTS. The stage is raised from the floor and created in the shape of a star. The ballroom is bright and colorful, with accents of yellow, pink, blue and green — it feels youthful and fun.

More: DWTS: Juniors Is Bringing 2 Familiar Faces Back to the Show

The voting is a little different

For viewers at home, there is no voting for you this time. The scoring was handed out by the judges. At the end of each show, the studio audience had a digital device where they voted to save one couple each episode.

These two scores were combined, and the lowest-scoring couple went home. The system worked smoothly, and it takes out the popularity contest that happens when America gets to vote — it’s more about what happened on the dance floor each week. 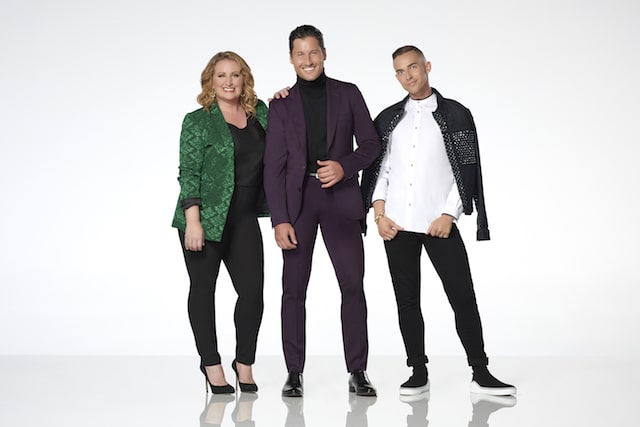 DWTS pro Val Chmerkovskiy, La La Land choreographer Mandy Moore and DWTS: Athletes winner Adam Rippon form the panel of judges for Juniors this season. Chmerkovskiy was the most serious judge of the trio, while Rippon delivered some funny puns and Moore offered the most positive encouragement to the young dancers. Their three different approaches blended well, and the constructive criticism offered to the contestants was a breath of fresh air.

More: Celebrity Kids Who Should Be Cast on DWTS: Juniors

The hosts have DWTS experience

Two of the most popular contestants from season 25 are helming the show — Jordan Fisher and Frankie Muniz. Fisher won that season, but Muniz won the hearts of viewers. Both of them were featured in the DWTS winter tour earlier this year, so they are definitely familiar to viewers. It takes a couple of episodes for them to ease into their TV host roles, but they were total pros by the time the season wrapped up.

Dancing With the Stars: Juniors premieres on Sunday, Oct. 7 at  8/7c on ABC.