It was a painful start to season 37 Survivor. With a title like David vs. Goliath, this season was clearly going to challenge the newest round of contestants in more than one way.

One of the most notable events of the season opener was the mean storm that pounded Fiji, where the contestants are living and competing. At one point, a boat ride among wicked waves spelled disaster for Rochester, New York, native Pat Cusack. He appeared to be badly hurt, his future on the show immediately thrown into question. When the Survivor medical team got involved, it was quickly decided that Cusack was in no condition to stay in the game; it was heartbreaking to watch. But what happened on that boat ride, and what kind of injuries did he actually sustain?

SheKnows recently had the opportunity to chat one-on-one with Cusack about his emotionally disappointing removal. He also revealed the inside secret of which player was supposed to be voted out had his injury never happened.

SheKnows: The moment you were hurt wasn’t captured on camera because it took place on a boat while production was transporting your tribe back to camp. Explain to us what happened.

Pat Cusack: I wish I could tell you myself. Unfortunately, I have no recollection from when the incident happened on the boat until I woke up in a helicopter landing at the hospital. It was emotional to watch the episode.

SK: How serious was your game-ending injury?

PC: I compressed my lower spine and ended up with some vertebrae problems. It was tough. Not only am I out of the game, but now I’ve got to go through this painstaking situation without my wife by my side. It was a rough couple weeks after that. 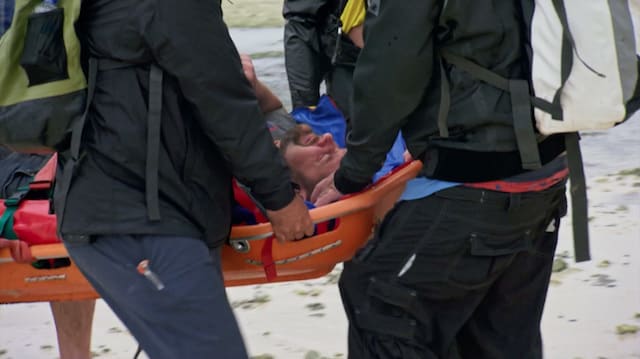 SK: Did you at least get to talk to your wife?

PC: Production was able to talk to her. I don’t exactly know what I’m allowed to say about that. They did make contact with her to let her know I did have an injury. They didn’t tell her whether I was still in the game or not, but I was being treated. That’s about the extent of it.

SK: What was the recovery process like? Days? Weeks? Months?

PC: I continued on the journey as far as staying on location. I was doing some self-rehab and physical therapy while back at Ponderosa. Once I got back stateside after filming, I went to my general practitioner, who referred me to a spine specialist. I’m where I’m at now, and that’s 100 percent. Hopefully, we can get the chance to go and play this game again.

SK: Tell us what was going through your head that whole time, realizing you were eliminated for something far beyond your control.

Knowing now the whole theme of “David vs. Goliath” was based around my story, with me having to grind and fight for everything that I have to be who I am today, why did this have to happen? I’ve fought and I’ve battled so long to have the opportunity to go play this amazing game, and to be ripped out by forces other than my own or my tribe-mates was a tough pill to swallow. To know the dream that I’ve dreamed for so long is now gone, it wasn’t by anybody’s control other than Mother Nature.

PC: Ultimately, my health and well-being in the long run is most important. It’s only a game. It’s a game for $1 million, however, I do have a wife and a family at home that I need to be healthy for. They have nothing but the highest medical team that you could ask for. In the moment, and for maybe a week or so after, I was very frustrated and upset I was taken from the game. However, if I was able to speak and communicate with the medical staff, it probably would’ve been different. They had to do what was in the best interest for my long-term health.

SK: Let’s say you didn’t get hurt. The edit was making it appear as if the tribe was possibly targeting you because they felt you were too bossy around camp. If Tribal Council had happened as planned, who was actually going to be voted off?

PC: I had a solid five alliance with the hopes of being able to bring Gabby and Christian in. The five I had was myself, Carl, Davie, Jess and Lyrsa. That would’ve gave us the numbers. With Nick’s lack of help in the opening stages of us getting to the island with the shelter and not really being too helpful, he was wandering out gazing at the ocean, looking at the sky and not really putting forth effort. Nick was on the chopping block. How much of that was the truth, I don’t know, because it is a game of deception. The other four people with Gabby and Christian could’ve just had me as a puppet. I don’t know, but I felt like the five that we were in and also with Gabby and Christian put me in a good spot. Nick was gonna go home. 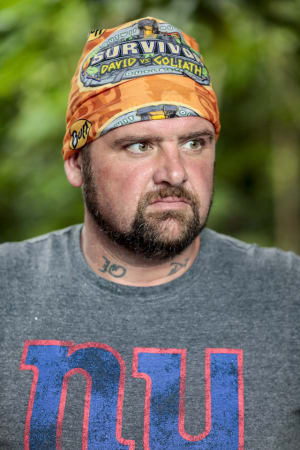 SK: Of your five-way alliance, who were you closest with?

PC: There were two people. Me and Carl hit it off right from the jump. We have similar stories. He’s a father. He has kids. He wasn’t handed anything on a silver spoon, so we’re kind of cut from the same cloth. I had a pretty good rapport with Jess. She’s a young girl and I have a daughter that’s the same age as her. It kind of gave me a little sense of home. It was like a security blanket. I couldn’t be with my family, but here’s a girl similar in size and looks as my daughter, so it put a place in my heart I could lean on. Hearing her story, knowing her dad wasn’t around and her parents were divorced, we took a liking to one another because I was kind of like a dad to her.

SK: Were you aware that some of your tribe-mates were complaining about your bossy behavior?

PC: That was a surprise to me. I’m a go-getter. I’m a contractor by trade. I just felt that from my perceptions of my fellow tribe-mates that maybe one or two of them had swung a hammer in their day. I took control because I have the construction background and I know that I could’ve gave them a really nice shelter, which I did. I didn’t see myself as being bossy. Yeah, it was a very big surprise to hear some of the things that were said in the episode. Everybody has their own opinion. I wish it would’ve turned out different, but it is what it is.