It seems Katy Perry and Orlando Bloom are ready to take their relationship to the next level: on Wednesday, the pair stepped out on a red carpet together for the very first time according to E! News.

Hours before their appearance, Perry teased their red carpet debut in a since-deleted Instagram Story, (which we also found on Twitter) of Bloom dancing in his dress clothes to Sir Mix-A-Lot’s “Baby Got Back.” In the video, she also used the caption “lemme touch ur butt” to really set the playful mood, and honestly? We love it so, so much.
https://twitter.com/KatyActivity/status/1044935768064622593And just in case you’re thinking, “Well, how do we know that’s actually Bloom in the video?” we can safely confirm that in photos of the couple taken on the red carpet, Bloom appears to be dressed similarly to the fella in the video. Plus, whose tuxedo-clad butt would Perry be videotaping if it weren’t Bloom’s? 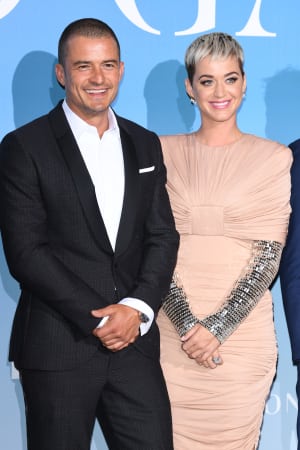 Bloom eventually finished getting dressed, and both he and Perry —who wore a pale pink gown with stunning, mirror ball-inspired sleeves — made their way to the red (well, it turns out it was gray) carpet at the Gala for the Global Ocean hosted by Prince Albert II of Monaco.

Bloom and Perry’s relationship is nothing new, but this appearance is a major milestone for the couple. They’ve dated off and on since 2016. While they’ve been spotted by paparazzi all across the world and on social media (like when Bloom shared a teaser video for an upcoming project, Killer Joe, on Instagram and Perry commented, “I need a season pass for that ass”), but they’ve kept their public appearances as a couple to a minimum.

Perry and Bloom have been fairly tight-lipped about their relationship in interviews too — and for good reason. It would seem the couple wants to keep their love life private, and Perry has gone on record to note that she doesn’t want to be defined by whom she is dating.

More: Katy Perry Flew Across the Country for Love (Kind Of)

“Of course, I love my relationship,” Perry told Vogue Australia earlier this year, “but that is one part of me, and I don’t want any part of what I do to be diminished.”

That said, we wish Perry and Bloom nothing but the best and hope their relationship continues to blossom.