Fans of Will & Grace were treated to a special throwback Instagram post from Debra Messing on Friday. It’s not only the beginning of the fall season, it’s also the 20th anniversary of the day Will & Grace premiered on NBC. To commemorate this special day, Messing hopped onto her Instagram to post a series of throwback photos that not only honor her beloved cast and crew but also remind us just how much these folks have changed and grown over the years.

The series of photos shows the cast sitting on the familiar set and takes fans on a trip back through the years. And while Messing captioned the image rather simply — “Happy 20th Anniversary of #WillandGrace! I CAN’T BELIEVE it was 20 YEARS AGO TODAY that our pilot aired! Swipe to see 20 years of this photo from today all the way back to the pilot!” — she also asked fans to chime in with their favorite episode: “Let me know what your FAVORITE episode has been! #willandgrace20th.”

Messing wasn’t the only cast member to post a special look back. Sean Hayes, who plays Jack, shared the same photo series as Messing, and Eric McCormack, who plays Will, posted a throwback pic on Instagram.

“A favorite photo of mine from the pilot,” McCormack wrote. “All in favor of me growing my hair back out?#WillandGrace20th.”

Hayes also got in on the throwback fun, posting his own commemorative photo slideshow of himself, Messing, McCormack and Megan Mullally from years gone by, writing, “Where were you on September 21st, 1998? Share your stories of seeing the pilot episode of @nbcwillandgrace and where you were in the world at that time in your lives. #willandgrace20th.”

Fans took Hayes up on his challenge, getting in on the anniversary action by posting in the comments where they were in their lives when the show aired two decades ago. 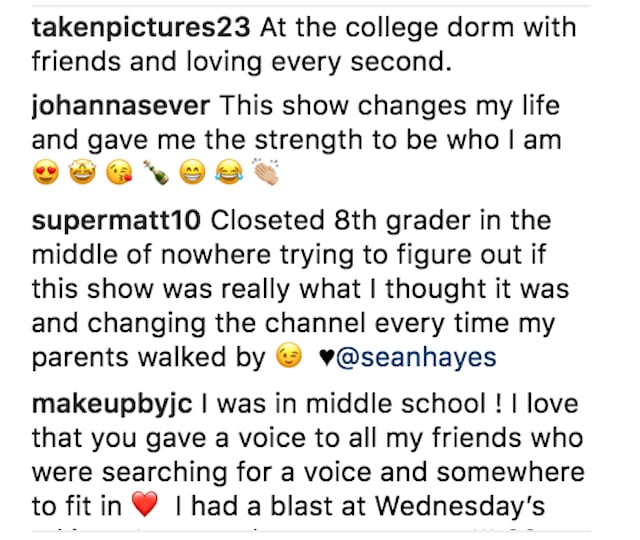 Of course, fans of the show are no longer lamenting its loss. After 11 years and eight seasons, NBC revived the series in 2017, and all original cast members returned. This anniversary celebration comes just before Will & Grace season 10 premieres on Oct. 4 on NBC, and truly, we couldn’t think of a better way to prepare for the new season than with this special throwback.