That’s it — everyone else can just go home because Glenn Weiss just won the entire Primetime Emmys. To be clear, the director did win an actual Emmy for outstanding directing for a variety special for his work on The Oscars telecast. But he completely stole the show tonight when he used his acceptance speech as an opportunity to propose to his girlfriend.

More: The Cast of  This Is Us  Drops Major Hints About Season 3 at the Emmys

Weiss’ speech proved poignant from the start, although no one could have guessed what was to come. “I’m really grateful to be here, but it’s bittersweet,” he said. “The person most proud of this moment would be my mom, and she passed away just two weeks ago. Part of my heart is broken. I don’t think it will ever be repaired. But she’s in me.”

While accepting the Emmy for outstanding directing for a variety special, #Oscars director Glenn Weiss proposes to his girlfriend… and she says yes. #Emmys pic.twitter.com/FcyUipMlx1

Many viewers were already moved by his words. But the jaw-drop heard ’round the world occurred a moment later, as Weiss continued: “Mom always believed in finding the sunshine in things, and she adored my girlfriend, Jan,” Weiss said — now appearing to speak directly to his partner, Jan Svendsen, who was seated in the audience.

“Jan, you are the sunshine in my life. And Mom was right, don’t ever let go of your sunshine. You wonder why I don’t like to call you my girlfriend? Because I want to call you my wife.”

He then pulled out the ring “that [his] dad put on [his] mom’s finger 65 to 67 years ago,” saying, “Jan, I want to put this ring that my mom wore on your finger in front of all these people and in front of my mom and your parents watching from above. Will you marry me?” 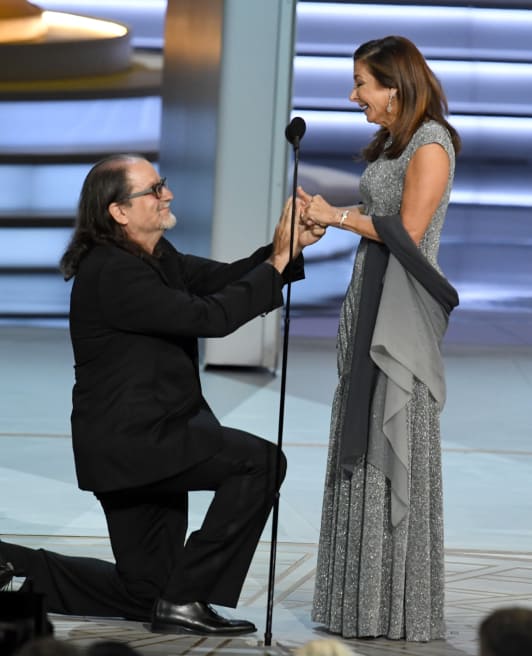 A tearful Svendsen then joined Weiss onstage, where he dropped to one knee and presented her with an engagement ring. Unsurprisingly, she accepted. It marks the first live marriage proposal in the 70-year history of the show.

Weiss, who took home his fourth Emmy Award on Monday, will undoubtedly look back on 2018 as the year he truly won big. Guess that just leaves one question: What was his backup plan if he’d lost in his category tonight?!