Debra Messing and Susan Sarandon have a hard time seeing eye to eye when it comes to things like politics — and it’s not something that’s entirely new for these two. Messing and Sarandon have butted heads over politics in the past, including when Sarandon supported then-Democratic candidate Bernie Sanders over Hillary Rodham Clinton during the 2016 election. Now, it looks like their feud is back on after staying dormant for some time.

In this most recent chapter of their ongoing feud, Sarandon reportedly credited the current administration with inspiring more women and people of color to run for office in 2018 while she was at the Toronto International Film Festival promoting two of her upcoming films, Viper Club and The Death & Life of John F. Donovan. The comment didn’t sit well with Messing, who took to Twitter to air her grievances with Sarandon publicly.

STFU SUSAN. Oh yes, PLEASE let’s give Trump CREDIT. I mean how else are you able to walk out on the street. Convince yourself that that this CATASTROPHE of a President who you said was better that HRC IS NOT ripping children away from parents seeking asylum, holding children https://t.co/UuXLLdahaB

Diving deep into her political stance on the current administration, Messing broke down all of her issues with Sarandon’s statement and called her a “self righteous narcissist.”

The feud hasn’t stopped there, however. According to a report from People, the day after her Twitter thread, Messing also retweeted the president of the Center for American Progress, Neera Tanden, who wrote, “I would literally pay for a service to purge @SusanSarandon in every form from my feed. This woman has borne no pain from her stance on Trump and seems perfectly happy at the suffering of others. Kids in cages. But thankfully she’s inspired.” 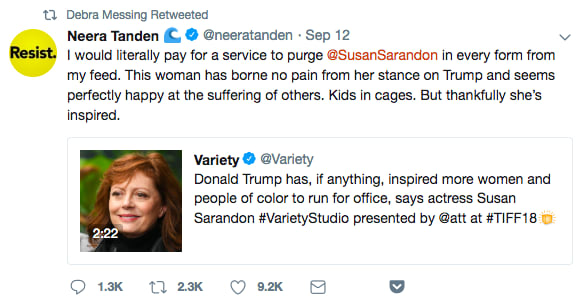 Meanwhile, Sarandon hasn’t made any direct comments on Messing’s tweets, though she did retweet journalist Natalie Shure, who wrote, “The ‘Trump era has inspired more women to run for office’ take has been absolutely ubiquitous but, strangely, no one lost their shit over it until Susan Sarandon said it,” along with a contemplative emoji, likely as a way of supporting her initial comments about women running for office during President Trump’s administration. 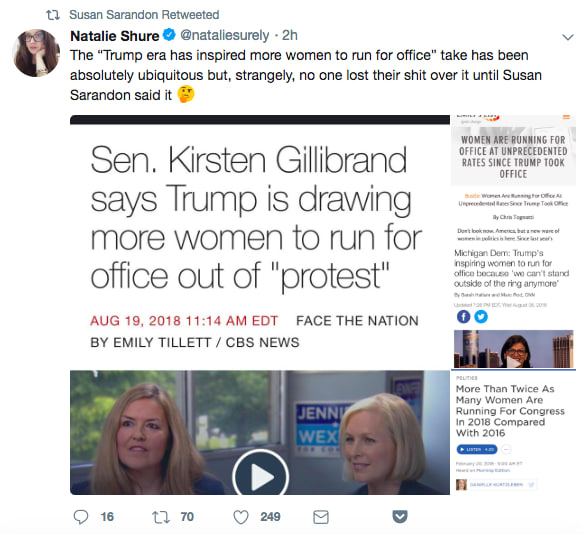 In 2017, when Vulture asked Sarandon to comment on this ongoing feud with Messing, she said, “I haven’t spoken to Debra, but I would certainly look forward to any opportunity to say hello.”

Celebrities feuding over politics certainly isn’t new, especially in the midst of primary elections for midterms. We’ll have to see whether this feud between Messing and Sarandon continues, but we predict, given the vehemence of Messing’s critiques, that it definitely will.